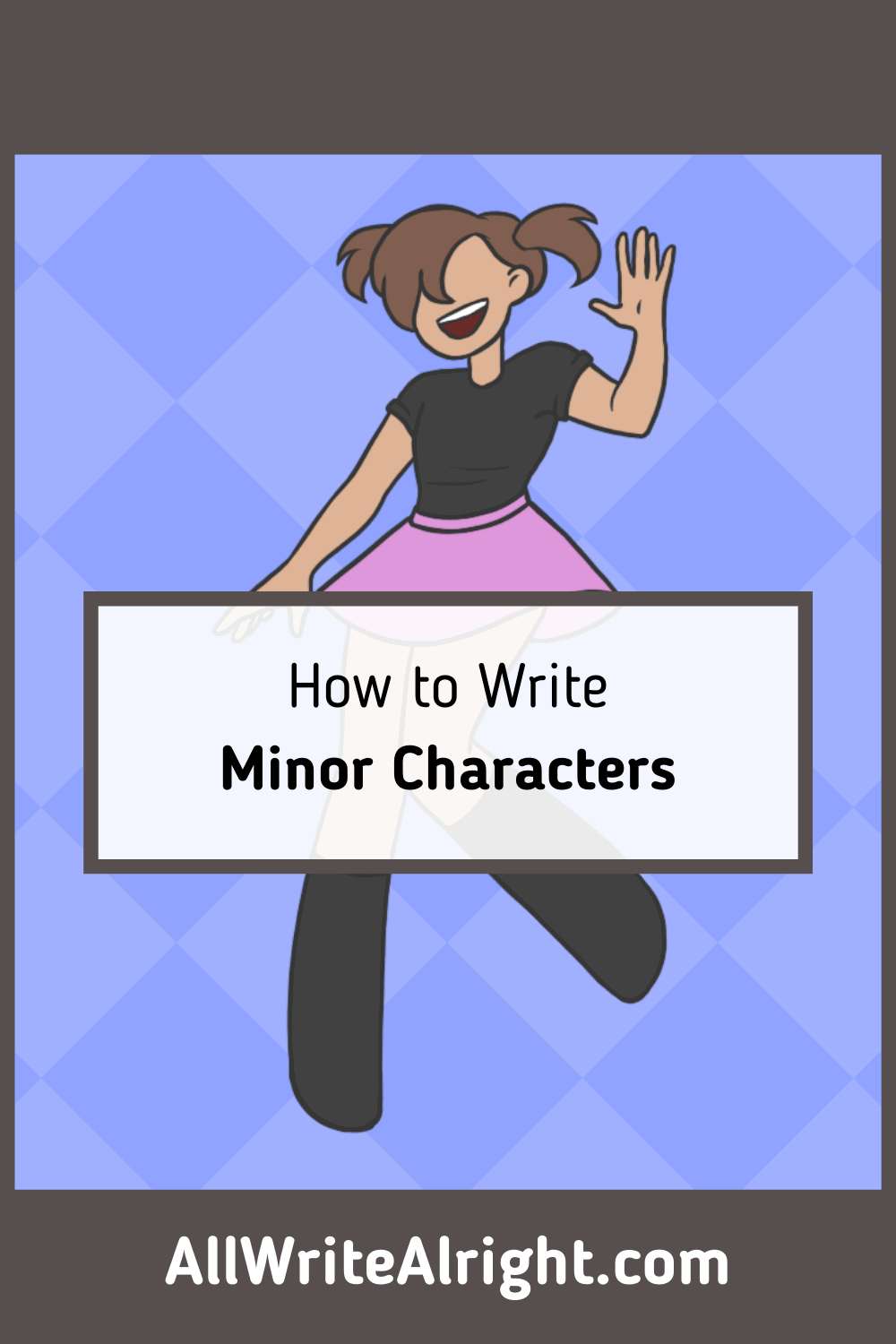 Minor characters are an often grossly underutilized tool in storytelling. Any good story is going to be filled to the brim with extras, whether they’re neighbors, store owners, teachers, or even creepy gravediggers that tell the main characters the haunting history of their town. Minor characters are constantly appearing in stories to do one small thing before disappearing into the background again. And in most cases, they’re forgotten by readers by the next chapter.

Minor characters don’t usually get enough development to make them interesting. They tend to be unremarkable, stale extras that exist for the sole purpose of aiding or hindering the main characters. They add nothing to the overall setting and often behave more like plot devices than actual characters. So what can you do about that? How can you leverage the minor characters in your story to create a more immersive experience for your readers?

To start, a distinction needs to be made between background characters, minor characters, and supporting characters.

What is a Background Character?

Background Characters do not play any part in how the story progresses, and are more a part of the setting than they are true characters. They may be nameless people that make up a crowd, or people the characters pass on the street. They can even engage in conversations with the main characters—but for the purpose of revealing information, and not personal development.

These types of characters can also be used as decorations to give more context to the character’s environment. For example, a few roughed-up bikers hanging outside a bar could be much more effective at establishing the atmosphere of the place than describing the building itself. Likewise, a shady stranger hanging out in an alley at night could better illustrate why your character is nervous while walking home, without having to spell out what the character is thinking.

What is a Minor Character?

Minor Characters, also sometimes called “side characters,” are not decorations. Rather than hanging out in the background, they engage with the main characters and contribute to the story in some way. Although they do not typically have the same depth as the main (or “major”) characters in the story, they tend to have more distinct personalities than background characters.

Minor characters act upon the story in small ways. If the bikers from the previous example stepped up to stop the main characters from entering the bar, then they are minor characters since they no longer reside in the background of the scene. With that said, characters do not have to do something to the main characters in order to be considered minor characters. The shady stranger from the other example could be planning to set fire to his ex’s house, or feed the local stray cats, or rob a nearby corner store, or plant flowers near the trash bins, or anything that could potentially influence the way the narrative unfolds. That would still make him a minor character.

What is a Supporting Character?

Minor characters can also play larger roles, but they are called Supporting Characters if they are substantially involved in the story. Supporting characters are the loveable sidekicks, the villain’s henchmen, and the love interests in stories. They tend to have developed personalities, mannerisms, and goals, and they frequently appear throughout the story.

Although supporting characters tend to have backstories, and even some story arcs of their own, it is often for the purposes of contextualizing a main character’s past, personality, and goals. However, they can sometimes star in their own spinoff stories if they are particularly developed and likable.

Minor characters don’t often play very large roles in stories, and some aren’t present for longer than a few pages. Because of this, it can seem like a waste of time to put too much effort into developing their personalities. However, neglecting your minor characters can have negative consequences on your story as a whole.

If your story includes several minor characters with shallow personalities, it can leave your story feeling shallow and unrealistic. A perfect stranger showing up with a solution is going to feel cheap and lazy, and that kind of writing isn’t fun for others to read. You want to immerse readers in the narrative you’ve created, and in order to do that, all your characters need to feel like real people. Otherwise, your readers might end up putting your story down and never picking it back up again.

However, if you want to create a convincing perfect stranger, you could look at my other article “Simple Tips for Writing Genius Characters” for inspiration.

No matter how simple a character’s role in the story is, you need to breathe some life into them. You need to at least give them a few distinct personality traits, goals, and a particular pattern of speech. They don’t need to be overly complex, but they need to feel like real people. You don’t even need to share the character’s goals and backstory with your readers—simply having it in your notes to reference can help you get more creative with their actions and dialogue.

Sometimes a character only gets a few lines in a book or a few seconds on screen to make an impression, so make sure you make that count. If you’ve done everything right, you might end up making a minor character a fan favorite.

Give Minor Characters a Reason to Exist

Minor characters should only be introduced into the story if they have a reason to be there, otherwise, you could overwhelm your readers with too many unnecessary characters. They should have some purpose, whether that’s to provide comic relief, to provide a solution the other characters wouldn’t have come up with, or to just add a new layer of depth to the story as a whole.

However, you could end up including a minor character for the wrong reasons. For example, including a character simply for the sake of diversifying your group of main characters will almost always give off the impression of “tokenism.” If a character only exists to be the token minority of the group, you could not only end up creating a bland, one-sided character, but you could also risk offending your readers too.

Give Minor Characters a Life Outside the Story

In addition to their purpose within the story, you should consider the minor character’s role in their society outside of the bounds of the story. What do they do when they aren’t assisting the main characters? What do they spend their free time doing? Do they have a quest of their own, to get a specific job, buy a home, or fall in love? Giving your minor characters the impression of a life outside of the story can make them feel much more authentic, and can make their personality feel much more three-dimensional.

Everyone is the protagonist of their own story, so take some time to consider what your minor character’s story is about. You may only ever show a small glimpse of that in the context of your main storyline, but it is important to keep in mind. A minor character’s goals can determine their behavior in different situations, and it can be an important indicator of where their loyalties lie. If their goal in life is to become rich and famous, they may betray their friends for a chance at fame.

Finally, giving your minor character a goal outside the story can make them develop naturally. You may end up surprising even yourself with how you have allowed your characters to grow throughout the story.

It can be tough to develop unique personalities for all the extras in your story, but if you break the process down, it’s not as difficult. For some pointers, take a look at another one of my articles: How to Make Characters Interesting, Complex, and Unique.

With all that said, you really shouldn’t get too caught up in making your minor characters perfect, complex characters. If you’re going to be including a lot of them, then you’ll never get your story finished if you take too much time on each character. Although it is important to create authentic, realistic minor characters for your story, it is also important to be realistic about the amount of work it should take.

The underlying point here is: don’t get carried away. It’s easy to get attached to minor characters and develop them into complex people, but the more complicated traits you give to each of your minor characters, the more difficult it will be for readers to keep up. Additionally, you could end up wasting time on characters and ideas that aren’t central to the plot, and your narrative will begin to unravel.

Make your minor characters interesting and unique, but only develop them as far as it makes sense for your story.

If you’re writing a longer story, such as a novel or a series of online chapters, then you will need to think about ways to help your readers remember the minor characters when they aren’t around. In many cases, minor characters are quickly forgotten once they exit the scene, so you should employ some techniques to make them more memorable.

These are only a few of the techniques that you can use to try to keep absent minor characters fresh in your readers’ minds. This is by no means an exhaustive list, so feel free to try your own ideas out if you think those will work better for your story.

No matter what your goal is, it is imperative that you take good notes about everything in your story. This is true for all of your characters, especially if you have a lot of them. You should keep detailed profiles for each and every character—no matter how small of a role they play in the story—so that you can be sure you are keeping them consistent.

Consistency is probably the most important element of character creation and development. You should never have your characters behave in a way that is inconsistent with their personality; however, with minor characters, it can be difficult to remember everything you need to know. Remember that it will take you much more time to write the story than it will take for the average reader to read it, so if a character behaves oddly, your readers will notice—even if you don’t.

Take notes, write on, and make something incredible. I know you can do it.