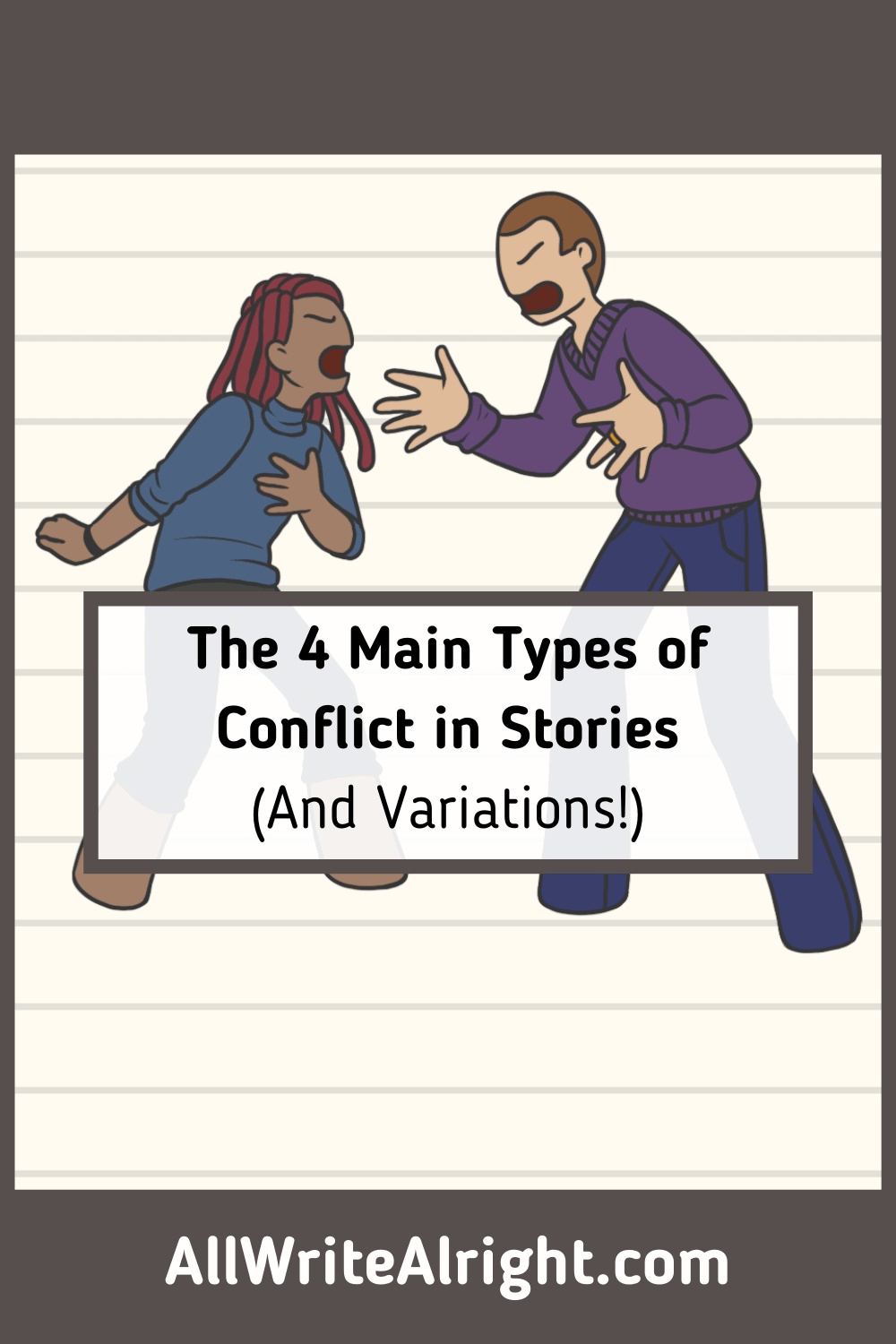 Conflict is the heart of your story, no matter what genre you’re writing in. It is an essential part of creating a story that will resonate with readers and keep them engaged long after they turn that final page. Conflict is memorable, exciting, and should be the driving force behind all of your plot arcs. If your story doesn’t have an abundance of conflict in various forms, then you don’t have much of a story at all. That doesn’t necessarily mean that all your characters need to be fighting all the time though; conflict is a much more complicated concept than that.

If you’re new to writing, however, a solid understanding of the different types of conflict and how (and when) to utilize each one is foundational to structuring your stories well.

What are the 4 Main Types of Conflict?

Among literature professionals, it is generally agreed that there are four main types of conflict. There seems to be a bit of disagreement on the web regarding this, but these are the four main structures for conflict that can take place in any type of story, regardless of genre, time period, setting, etc.

This is the most traditional type of conflict. As the name would suggest, “man vs. man” conflict (more accurately referred to as person vs. person, character vs. character, or interpersonal conflict) involves two or more characters that oppose each other. That could mean they physically fight each other, argue, or indirectly try to sabotage the other in some way. The conflict is derived from the actions of characters, and typically (though not always) involves a distinct protagonist and antagonist.

Examples are the best way to get a feel for what all “man vs. man” conflict encompasses, so here’s a short list of ideas:

Almost all stories contain some form of interpersonal conflict, but it isn’t always obvious. Interpersonal conflict can be more discreet, or it can involve minor characters. Conflict can arise between characters on the same team or those that share a common goal, too. One or all of the characters could even be unaware of the conflict as it is happening, such as with sabotage, trickery, or manipulation. No matter what your story is about, you can find some way to inject conflict between characters to make things more interesting.

“Man vs. self” conflict (also called internal conflict) is a type of conflict that involves introspection, and a character’s struggles with their own morality, vices, sense of self, and goals. Generally, it involves a difficult decision that the character must make, and signals the direction of growth for that character as the story progresses. If the hero of the story struggles to do the right thing out of fear, greed, or some other personal obstacle, that will likely make them a more interesting and relatable character for readers to root for.

Here are some more examples to give you an idea of the scope of internal conflict:

In many cases, internal conflict results from the character’s inherent flaws. Personal biases, fears, and bad habits can create a lot of inner turmoil for characters, and can add a lot of interesting introspection and personal development in their individual character arcs. Instead of wondering who is going to win a fight, readers are now kept in suspense about whether their favorite characters will end up doing the right thing. Of course, sometimes it’s better to have them do the wrong thing, just so you can surprise your readers. As an added bonus, that could foreshadow a redemption arc for that character later in the story.

If you want some more specific advice about how to give your characters reasonable flaws, I recommend taking a look at my other article: How to Create Complex Flaws for Characters. I go more into the specifics about how to make flaws believable and interesting, without going over the top.

“Man vs. nature” is a type of conflict that pits the characters against the forces of nature, and to some extent, the unknown. Rather than facing off against each other or themselves, characters instead have to contend with the elements, wildlife, and natural disasters. Often, characters conflicting with nature have very little control over the situation, and resort to whatever tactics are necessary to simply survive. Victory over nature is not usually an option.

This type of conflict is a little harder to wrap your head around, so here are some more examples to help explain the many ways it can be utilized:

The point behind “man vs. nature” conflict is to illustrate the often trivial pursuits of humans in comparison to the apathetic and systematic force of nature. Think of human emotions and morality as an unstoppable force, while nature is the immovable object that gets in the way.

Sometimes, your hero needs to feel like the whole world is against them. That’s where “man vs. society” conflict comes into play. Rather than having a single foe to contend with, your character would be facing off against oppressive governments, the general public, or cultural norms. The character would need to defy all odds to win a war, change the public’s perception, or dismantle a government. Many times, stories that revolve around this type of conflict adopt a dystopian sort of setting, but not always.

There are a ton of options for utilizing “man vs. society” conflict in your stories, such as:

As you’ve probably noticed from those examples, the “society” doesn’t necessarily have to be an entire city or world. The society creating the conflict could be within a family, a high school, or even a prison. For that reason, I prefer to use the term “collective” rather than “society” since it more accurately describes how this type of conflict actually functions in stories.

Other Types of Conflict

One such example is “man vs. technology,” in which characters must face off against mechanical horrors of their own (or society’s) creation. Futuristic stories, cyberpunk settings, and many different types of dystopias could benefit from a healthy dose of evil robots. This type of conflict is notorious for illustrating the complexity of the human characters in contrast with the cold, unfeeling predictability of artificial intelligence. However, sometimes that trope is turned on its head, and humans are revealed to be more cruel and apathetic than the robots.

The next type is “man vs. gods,” in which characters face off against deities much larger and more powerful than themselves. Stories that utilize this type of conflict usually revolve around it, and they’re great for emphasizing the character’s determination to win despite the odds. Similarly, “man vs. fate” pits characters against their predetermined futures, daring them to resist the powers of the universe. Sometimes, that fate is determined by the gods, so the two types of conflict go hand-in-hand.

Finally, “man vs. supernatural” puts a magical spin on the traditional “man vs. nature” conflict. Characters often face-off with ghosts, vampires, evil spirits, and various other fantastical or mystical creatures. This is a huge element of horror stories, as I’m sure you can imagine. What would the horror genre even look like without demonic possessions, communication with long-deceased spirits, and the undead? However, that type of conflict has its uses outside of the horror genre as well. Heroes may have to deal with trickster fae, magical spells, and animal familiars instead.

In the end, the best advice I can give you about including conflict in your stories is this: don’t let the conflict be an isolated situation. Every argument, every fight, and every encounter with danger has an effect on your characters and the way they make decisions moving forward.

Conflict should echo throughout the text and be present in your characters’ memories. Bits of an old argument should come up from time to time, terrible fights should change how a character approaches violent situations, and feeling powerless should absolutely alter the character’s perception of the world.

Of course, there isn’t a perfect solution for every situation. Different characters deal with different situations in their own ways. A situation may leave one character with nightmares, while inspiring another character to take a stand for something they believe in. The point is, conflict is monumental, and it can make people change—for better or for worse.

Finally, you should never pass up an opportunity to let your characters evolve. It makes for a more interesting story, and you’ll end up with characters your readers will want to root for.