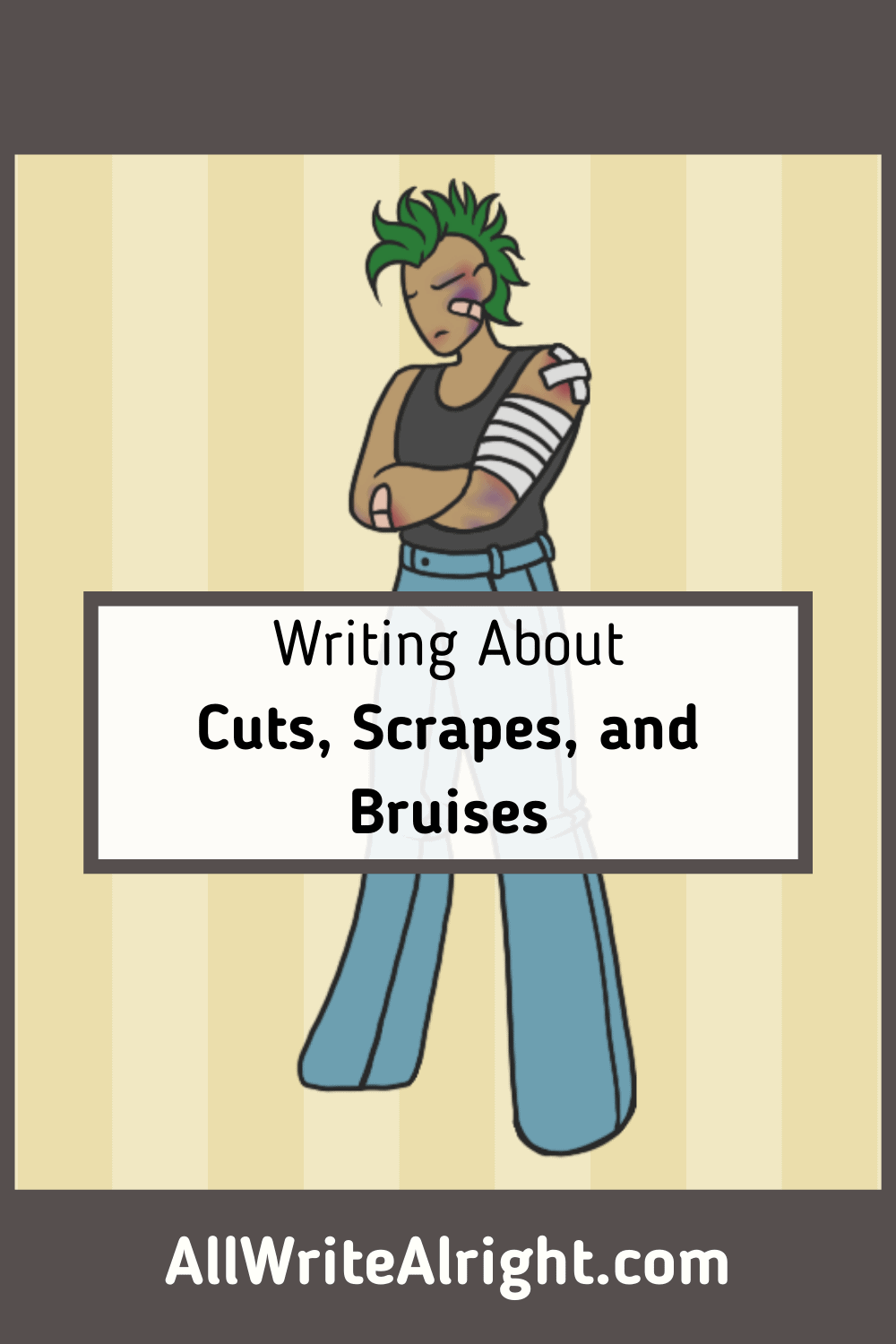 If a character gets into a fistfight, chances are, they’re going to end up with a few nasty bumps and bruises. Likewise, tripping on asphalt or accidentally grabbing a sharp object could also result in your character looking a little worse for wear.

There are infinite ways for characters to injure themselves over the course of a story, and their injuries could range from a mild papercut to a life-threatening wound. What’s more, injuries have a way of cropping up in all genres, from action and horror to slice-of-life and coming-of-age stories. If you aren’t prepared to write about even the small bumps, bruises, and gashes your characters experience, your readers will notice.

There’s a lot that goes into portraying realistic injuries in writing. You need to make sure you understand how injuries look, feel, and progress, and your characters might need to know a thing or two about basic wound care. If you don’t know what you’re talking about, or all your knowledge about injuries comes from anime, your injury scenes might make readers roll their eyes. But don’t fret—you’re here for a reason, aren’t you?

This article is going to be a short one, but it is designed to give you an overview of the basics you’ll need to know to write about most cuts, scrapes, and bruises.

A word of warning: some language and descriptions may be upsetting if you are sensitive to blood, gore, or violence. Read at your discretion.

How to Describe Cuts, Scrapes, and Bruises in Writing

When you’re describing what a wound looks like, it can be easy to get caught up in the details. Rather than trying to describe exactly how it looks, though, try to focus on the details that will give readers an indication of how serious the wound is.

How to Describe Cuts and Scrapes

The first thing you should know about any injury (but especially those in which the skin breaks) is that it will immediately begin to swell up. Blood rushes to the area to accelerate the healing process, and that makes the skin around the wound look red and swollen, and it will feel warm (though not hot).

Additionally, most wounds aren’t going to bleed as much as you’d expect, though there are a few exceptions to this. Head wounds bleed much more than wounds elsewhere on the body, and if the character has been drinking or exercising recently, their wounds are going to bleed more.

When describing a cut or scrape, don’t go describing how red and wet it looks. Your readers will know about that already. Instead, try to give indications of how severe the wound is. How wide is the injury? How far does it stretch across the character’s body? Can bone be seen? Is blood seeping into their clothes or pooling underneath them? Is it a clean slice, or is it torn open? Have parts of the flesh been pulled away? How much does the wound frighten the injured character and the others witnessing the scene?

In most cases, you shouldn’t overthink this description. Injuries happen fast and are often treated quickly, so unless the injury is particularly significant, don’t waste a lot of time giving readers all the gory details. If you’re writing in first-person, your character might not even be able to look at the wound anyway, let alone examine it.

How to Describe Bruises

Bruises are fairly straightforward to describe. They are simply splotches of discoloration where blood has pooled under the surface of the skin following a blunt injury. The most important thing to keep in mind, of course, is the fact that bruises will change color over time.

There is no specific timeframe for when bruises change colors, however. Some bruises may stay purple for the majority of the healing process, then quickly cycle through the other colors before fading completely. Others may stick around as faint brown splotches for a long time after sustaining the initial injury. Therefore, the color of a bruise cannot be used to estimate when the bruise was sustained any more specifically than “recently” or “a while ago.”

When describing bruises, it’s also important to keep in mind that the words you use can impact the way readers perceive the situation. For example, describing a bruise as a “contusion” creates a violent connotation, while “blemish” doesn’t sound so harsh. Describing bruises as  “discolored” or “shadows” comes with a more melancholy connotation. If you want to get more poetic, you can describe bruises like watercolors or sunset clouds, but be aware that language like that inherently romanticizes the injury (or the injured character), so be mindful of when you do this.

How to Describe What Cuts, Scrapes, and Bruises Feel Like

The way a minor injury feels is going to depend on its location, and how it was sustained. An injury from blunt trauma, such as a bruise, is going to feel dull, and like it’s throbbing. It will feel stiff and firm from the swelling, and it may sting if touched. As the bruise ages, it may feel tender and sore, but only when pressure is applied or the area is moved.

A wound from a sharp object, however, is likely to feel hot, tingly, or numb. The pain may be delayed, but after the initial rush of adrenaline wears off, the pain from this type of injury will be fairly constant. If the injury was sustained on a part of the body that moves, such as the face or a joint, then it may cause sharper, more sudden pain when that body part is moved.

Scrapes tend to feel hot and itchy, and the scab from a nasty scrape can cover a wide area. It will also get itchier as it heals, motivating the character to pick at it and delay healing.

How Cuts and Major Wounds are Treated

Bruises sustained from mild trauma require no treatment and heal fine on their own.

Most cuts and scrapes must only be cleaned, disinfected, and covered with a bandage, but there are situations in which more extreme measures must be taken.

When a character sustains a major injury, the first and most important thing to worry about is blood loss. If the character is losing too much blood, they may go into shock, which can be deadly. Either the character themself or another character should apply pressure to the wound with a clean, absorbent cloth, such as a towel or sheet. At this point, stopping the bleeding is more important than sanitation, so if all the characters have to use is a sweaty shirt they pulled off someone, they should use it.

Once the blood begins to clot and is no longer gushing out of the character, the wound will require stitches. Depending on the character’s situation and the genre of your story, a professional to give them stitches might be hard to come by. Many action heroes can be seen stitching up their own wounds, while those in dystopian or criminal settings may turn to a shady back-alley doctor to fix them up. Once a wound has been stitched up, it can be covered like normal. However, the stitches can’t stay in forever. Depending on the severity of the wound, your character should get those stitches out again anywhere between 3-14 days later.

It’s important to mention that if your character continues on their journey without taking the time to heal, they could run into complications. If their bandage gets wet, for example, you should have them replace the soggy bandages to make sure their wound stays clean. If someone pats the character on the shoulder, not knowing there’s an injury hidden under their shirt, the character is going to flinch or make a noise from the pain of their injury being touched.

Your readers might find it odd if your character covers a wound and then never acknowledges it again, after all. Don’t let basic treatment make wounds disappear magically (unless, of course, magic is involved).

How Long it Takes Cuts, Scrapes, and Bruises to Heal

The time it takes an injury to heal is going to depend on the severity of the injury. As a general rule, however:

As long as there are no complications, your character will be good-as-new in just a few weeks. However, their age and health influence how fast they heal, as does the weather, and many other factors. If the wound becomes infected, that could significantly extend the time it takes for the character to heal.

Some Parting Thoughts on Writing About Cuts, Scrapes, and Bruises

If you can’t come up with one good, plot-related reason to injure a character, then you might want to reevaluate the scene you have prepared. An injury without purpose is just a way of boring readers and writing yourself into a corner. Everyone loves a bit of angst in their stories, but don’t just maim your characters for the hell of it. Give their injuries meaning, and the scenes will become much more impactful additions to the story as a whole.