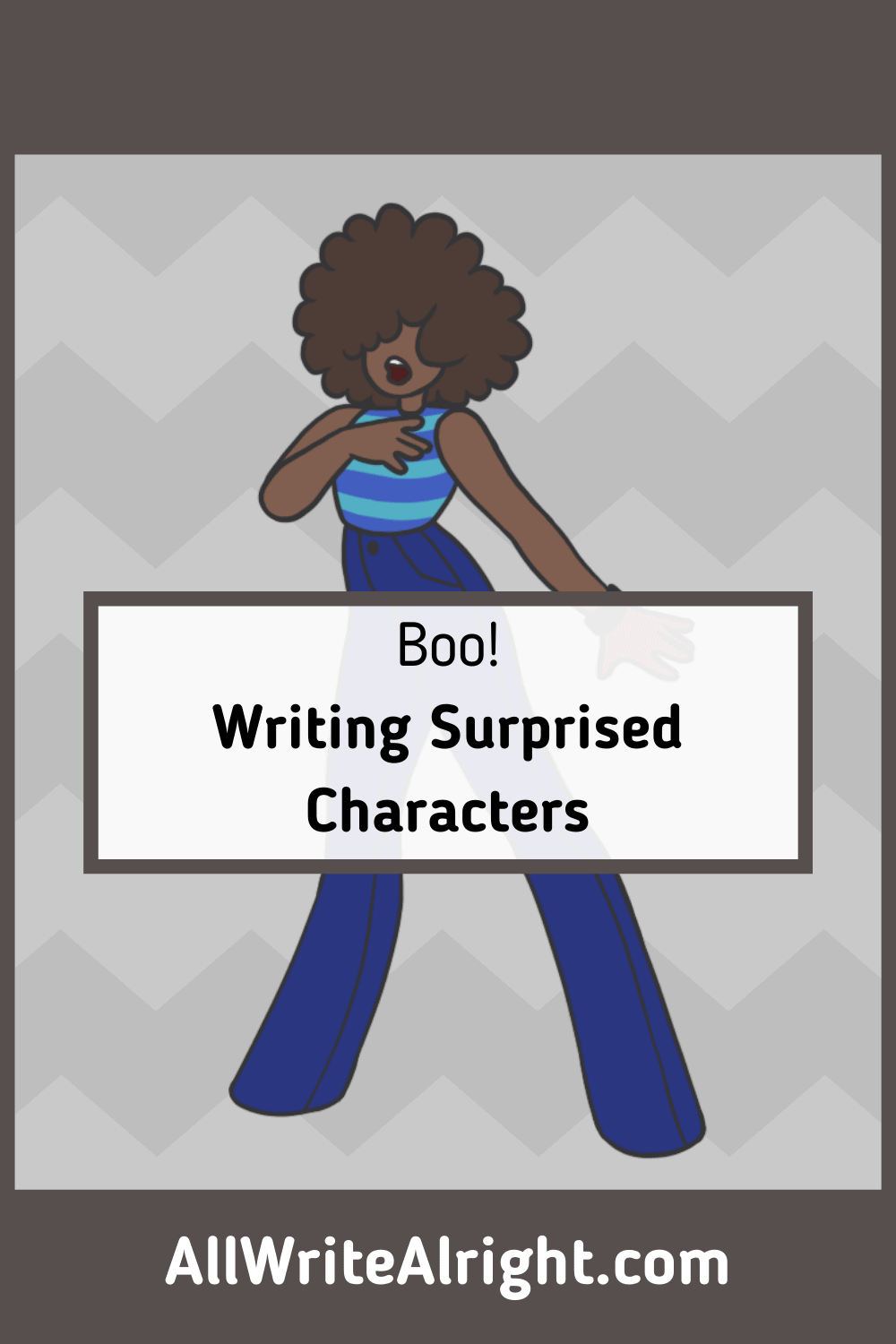 You’ve reached the most important part of your story, where the main character learns something that could change the fate of the world forever. This is a huge moment—but when you try to write the character’s reaction, it comes off as stale and unremarkable.

Many writers struggle with conveying strong emotions, but conveying surprise well is especially important. When something big happens in the story, like a breakup, a sudden event, or some unbelievable knowledge being revealed, it can be difficult to have your characters react with the appropriate awe and shock. So how should you approach this?

Contents hide
1 Surprise is a Universal Emotion
2 Have a Good Understanding of Your Character
3 Kinds of Surprising Circumstances
4 Reactions to Unexpected Events
4.1 Physical
4.2 Vocal
4.3 Emotional
5 The Speed of the Event
6 Writing Surprised Body Language
7 After the Initial Shock
8 A Final Piece of Advice

Surprise is a Universal Emotion

Surprise is one of the universal emotions, meaning that it is experienced across all cultures and time periods. These six emotions are happiness, sadness, anger, surprise, fear, and disgust. Contempt is also often included. Each of these emotions is expressed instinctively, so they often manifest in similar ways between individuals.

This is part of the reason why it is so difficult to write about, since it can be difficult to differentiate reactions. If surprise is expressed universally, how can you make your character’s reaction unique and impactful? Although most people react in fundamentally similar ways, there are many ways you could set your character apart depending on who they are and what they experience.

Have a Good Understanding of Your Character

Long before you have to write about the big event, you need to establish your character within the story. You need to know your character inside and out, and you need to be able to convey relevant information about them to your readers. Have you established them as a stoic character, or are they somewhat flighty or dramatic? Do they tend to take things in stride? Do they overreact to small inconveniences? These may seem like unimportant questions, but establishing a strong and consistent character early on is going to make it much easier to write about how they react to things later in the story.

In addition to the character’s personality, you should consider their past and how they were shaped by their previous experiences. If they have been hurt by a loved one in the past, they may react far more negatively to someone breaking off a relationship with them. If they grew up in a bad neighborhood, they may not be as afraid of guns or violence as someone from a nice suburban neighborhood. Consider the surprising event you need to write about. Are there any parallels between that and the character’s past? How does that change how the character thinks about the situation?

The character’s personality is not the only factor that can influence how the scene plays out. The type of surprise can change how the character responds. There is a wide range of situations that can be considered surprising; there can be little surprises or huge life-changing scenarios. Surprises can also be either negative, positive, confusing, or neutral.

Some examples of surprises could be:

Surprises come from a variety of sources, and because of their prevalence in everyday life, it is difficult to avoid having to write about them at some point. Try to think of a story where there are no surprises. That would be tremendously boring, wouldn’t it?

Most stories need a surprise in order to move the plot along. Maybe the main character encounters a magical creature that needs help, or maybe the story centers around someone trying to explore their hobbies again after a devastating breakup. Maybe the main character discovers that they are a “chosen one” of sorts, and has to go on an adventure to stop an evil plot. Regardless of the type of story you are writing, there are bound to be surprises.

Any time a character encounters a surprise, they are going to have to react. If you do not acknowledge a character’s reaction to seeing something incredible, horrifying, or joyful, then the scene is going to feel synthetic and dull to your readers. Exploring the way a character moves and feels can really bring them to life, and add a more three-dimensional aspect to your storytelling.

When a person encounters something shocking, it triggers a fight-or-flight reaction. This is a release of adrenaline and other hormones that allows a person to react to a perceived life-threatening situation. When your character is surprised, they are most likely going to react with this kind of acute-stress response, regardless of whether the surprise is positive or negative.

Vocal reactions are involuntary noises that a character may make as a result of being surprised. It is usually some sort of exclamation, like an expletive, gasp, or filler word. Some examples are:

You get the picture. They could also shout another character’s name, or say something more specific to the setting. However, not every character could respond vocally. Even if a character responds with a shout or a gasp one time, that doesn’t mean that they’ll do that every time to every type of surprise.

After the initial physical response, the brain can catch up to what is happening and the character will be able to make more deliberate choices about how to think and act. What is their perception of the surprise? If it was a prank, how do they respond? Are they a good sport about it, or does the encounter frustrate them? If the surprise was more substantial, what does the character think about the implications of the surprise? Is the world in jeopardy? Is life as they know it forever changed?

Surprises can trigger a number of other emotional responses, depending on the implications and the character’s personal history. A character with PTSD may panic, or react with an angry outburst. Other reactions could be fear, sadness, joy, or confusion.

If you want more information about triggers, I explain it in more detail in my article Writing a Character with Anger Issues.

The Speed of the Event

One suggestion I have for writing about surprise is to handle the initial response quickly. In most cases, a surprising situation is over quickly. Don’t use sixteen paragraphs to explain something that happens in the blink of an eye. Take your readers along for the ride, and align your writing with how fast they expect things to happen. If you take too long, it’s going to feel awkward.

With that being said, there are exceptions to that advice. If a situation is incredibly dramatic or dangerous, time can seem to slow down while it is happening. Think of something like a car wreck as an example. It is over in the blink of an eye, but slowing down the scene and stretching it across several paragraphs can actually be a good thing. Think about how movies handle scenes like that, and how they manipulate the speed of an event for a different effect. Slowing down an event can add some great drama, but just be careful not to overdo it.

When a person first encounters a surprising situation, their body usually responds before they have time to think. Of course, the way a person reacts physically to a surprise depends largely on the kind of surprise they are faced with. Finding a raccoon in a trash can will elicit a different reaction than seeing a kitten, for example. Both are surprising, but the context of the surprise demands different actions.

Depending on the situation, a character could respond to a surprise in a number of ways:

You’ll have to figure out which elements to include based on the different factors in your story, and the impact that your choice could have on the tone of the story. Having a burly tattooed man faint as a result of a surprise could have a comedic effect, but the audience may not take this reaction seriously.

After the Initial Shock

Minutes, hours, and even days after the initial surprise, the character may still reflect on what happened. Things could be different from now on, and they might have to get used to a new way of life. Or, they might have a difficult decision to make. Maybe they were embarrassed, and the thought of returning to school or work or elsewhere is making them anxious.

Although not every surprise is going to merit deep thought afterward—most people forget about a jumpscare in a movie pretty quickly anyway—some do. Your character may have a difficult time coming to terms with the situation, and the surprise could continue to haunt them for a while.

They may go into denial about what happened or what they saw, and retreat from other people. They may have trouble sleeping at night, either because they can’t stop thinking about what they need to do or because their dreams are plagued by nightmares. They could be too fearful or excited to live their day-to-day life normally.

For more info on nightmares, check out my post Writer’s Guide to Dreams and Nightmares.

Regardless, if the surprise was meaningful to the storyline and not just a little interaction, you need to emphasize its importance. What does it mean for your character, and how do they feel about it? What is going to happen next? Does your character make the right choices in the aftermath? Consider these things, and try to write in a more prolonged reaction if it fits your story.

A Final Piece of Advice

Now, this last piece of advice is really important. Introducing surprises can be extremely difficult, but don’t take the easy way out. If your scene starts with “and suddenly,” then you might need to reconsider how you’ve structured your story. Surprises are a great technique for progressing a story, but you don’t want your readers to get confused by a scene that changes too suddenly.

In most cases, foreshadowing can be a really helpful tool for avoiding a jarringly unexpected situation. Cluing your readers in to something your main character doesn’t know can create good tension; they know that something is going to happen, they just don’t know what, when, or how. Then, when the surprise finally comes, it can be satisfying for your readers.

Let’s create an example. This hypothetical story is about a man and a woman in a relationship. You could show little conflicts in their relationship that seem relatively minor but build up over time. The man, our main character, remains blissfully unaware of the growing tension between him and his girlfriend, but the readers would know that something is about to happen. They might be expecting an argument or breakup, and you could give that to them. Or, you could surprise the readers with a new kind of conflict that changes the way the characters see each other. They may have to go on an adventure together, where they end up falling back in love with each other along the way.

Just because you let the readers know what’s going on doesn’t mean you can’t still surprise them too. This way, the surprise will be accepted a lot more readily by your readers.