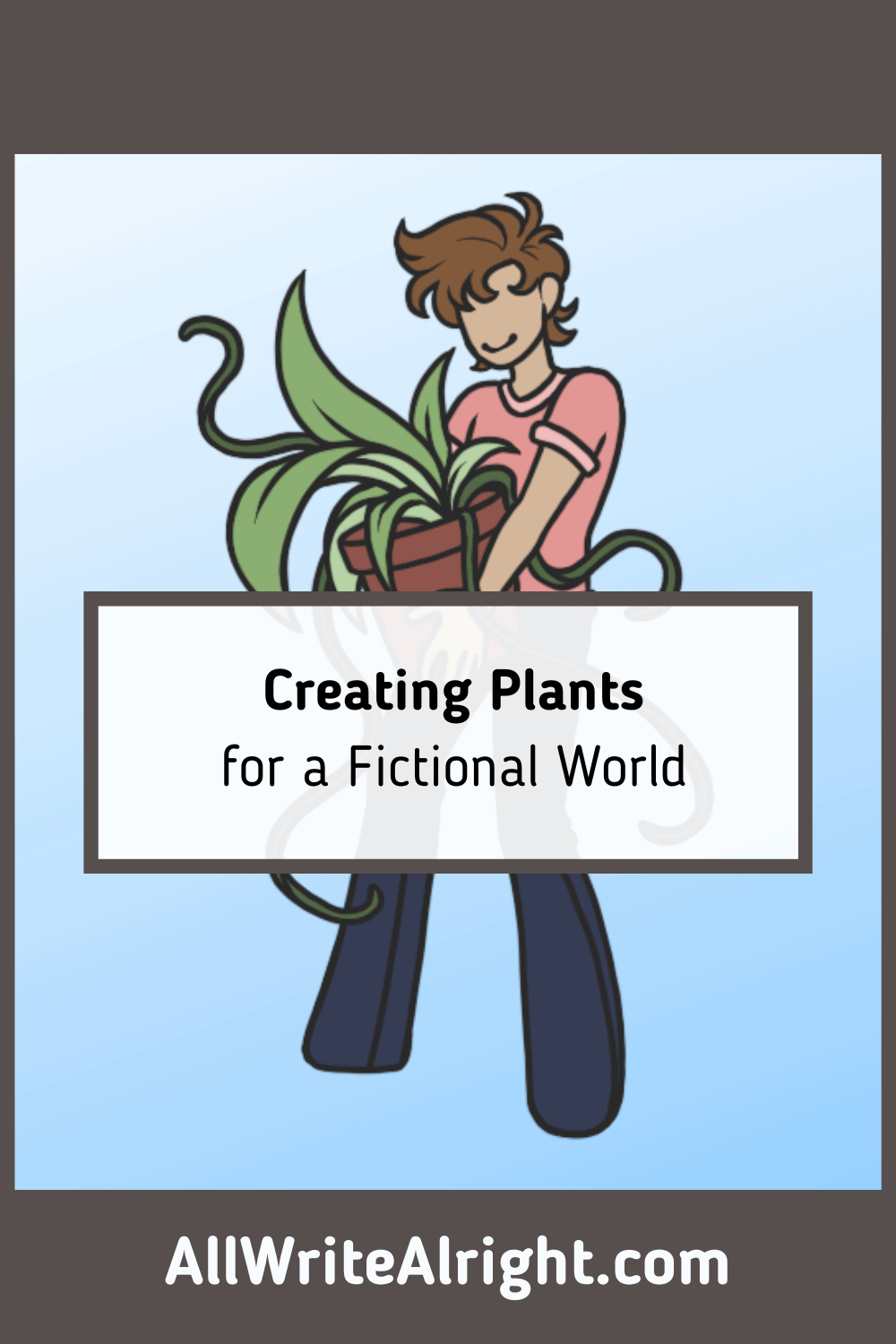 Designing fictional plants is one of my favorite parts of worldbuilding. Plants are weird and wonderful things. They can be microscopic or hundreds of feet tall. Some can glow in the dark, some are carnivores, and some can explode. There are plants that smell like rotting meat, plants that bleed, and plants that are so toxic that even consuming the most trace amounts of it can be lethal. There are fruits, thorns, vines, flowers, spores, and so, so much more. In fact, it’s hard for fictional plants to compare to the weirdness that exists in the flora on earth.

With so much to consider, it’s no surprise if you’re feeling a little overwhelmed. With a little direction, however, you’ll be able to populate a whole fictional ecosystem with flora!

How to Design a Fictional Plant Species

To design a fictional plant, you have to answer four basic questions: What does it do, where does it exist, how does it reproduce, and what does it look like?

What Does the Plant Do?

From a basic standpoint, you have to decide what you need this particular plant to do. Is it edible? Is it toxic? Does it have medicinal properties? Is it psychoactive? Does it just smell really good?

Keep in mind that a plant can fall into multiple different categories at once—it may be psychoactive and decorative, or used for both culinary and medicinal purposes. Also, different parts of the same plant may have different uses. A plant may have edible berries but poisonous leaves, or edible leaves and flowers that can be used for perfume.

A plant may also be edible for certain species while being toxic to other species. Onions and garlic are delicious additions to any recipe, but they can be very dangerous to feed to your pets. Alternatively, you wouldn’t expect to see humans eating the toxic leaves of a eucalyptus plant, but koalas eat exclusively eucalyptus. Keep this in mind when designing your own fictional plant, and consider which animals or bugs may have adapted to eat it even if it’s toxic to people.

If you need help populating your fictional world with some unique animal species to chow down on your new plants, you can check out The Ultimate Guide to Creating a Fictional Species!

It’s also possible, of course, that a plant just exists with no real application—it’s not toxic but it doesn’t taste good enough to eat, and has no important properties for humans. Sometimes, a plant can just look cool and that’s that.

Where Does the Plant Exist?

Once you have a basic idea of what the plant does, you need to determine what conditions it requires to grow.

Does it need a moist environment? A sandy soil? Does it only grow on the ceilings of caves? How about underwater? What temperature does it thrive in, and which parts of the world would provide the most suitable habitat for it? Where is the plant native to, and how widespread is it?

Another thing you should consider is whether or not the plant has been artificially introduced into a new environment, and if it has, how has it fared in this new environment? If it was brought over to a new part of the world to be cultivated, what unique challenges would farmers face that they wouldn’t if they were growing the plant in its natural habitat? Would that plant struggle to thrive, or would it invade this new environment and choke out the local flora? Would it be susceptible to new pests? Would it grow unrestrained? Would it poison a large group of animals that eat it, not knowing it’s toxic to them? An invasive species can overthrow the balance of an entire ecosystem if it isn’t kept under control.

How Does the Plant Reproduce?

Reproduction is often where plants get weird. Finding unique and effective ways of spreading seeds far and wide often results in some downright strange evolutions.

The primary ways for plants to spread their seeds are through air, water, animals, and expulsion.

With that said, seeds are not the only way plants can reproduce. Mushrooms notoriously spread by emitting spores into the air, which create an underground network of mycelium from which more mushrooms can grow. Many other plants, such as grass and aloe, spread by a process known as clonal growth, in which genetically identical clones of the plant will grow up from the same root system, creating a clonal colony.

And of course, let’s not forget about magic. If you’re writing a story in which magic is rampant, then having plants that can only grow under magical circumstances is always an option.

Designing the appearance of a fictional plant is not as straightforward as it seems. Many of the decisions you made in the above sections will have an impact on what the plant ultimately looks like.

The choices you made in regard to the plant’s method of seed dispersion, the climate in which it grows, and the properties of the various parts of the plant will help guide you in the design phase.

For example, plants that grow in hot and dry environments end up with thick and bulky shapes since they often have to store water for long periods of time. A plant that disperses its seeds via expulsion will have large seed pods, whereas a plant that disperses its seeds via the wind will likely have a fuzzy or winged appearance. Plants that are meant to attract animals or bugs may smell sweet or putrid, or they may be enticing shapes and colors.

With that said, you still get a bit of freedom in designing the colors, size, and overall shape of the plant. Fruits and flowers also have a huge variety of colors and structures, so you can really have fun with this section. Strawberries look entirely different from pomegranates, bananas, and pineapples after all, and the same goes for flowers!

How to Name Your Fictional Plant Species

Remember that everything in your world needs to have a name. Common names for plants often describe the most iconic features or appearances of a plant, as is the case with morning glories (which only bloom in the morning) and blackberry bushes (named for the fruit it produces, which is in fact, a berry that is black). These names are often used locally, however, and different communities might have different names for different plants—even if they speak the same language.

If you really want to get in the weeds (haha), then you can consider the taxonomy of plants in your world to give your flora more standardized and scientific names. On Earth, scientific names for plants follow a strict pattern: the first part of the name indicates the genus (a category of genetically similar organisms), while the second part of the name indicates the specific species within that genus. These are often based on Greek or Latin words, such as “Helianthus annuus,” which is the scientific name for the common sunflower. “Helios” is the Greek name for the sun and “anthos” is the Greek word for flower, while “annuus” indicates the specific type of sunflower. There are roughly 70 types of sunflowers, so that distinction is important!

Now obviously, your planet’s taxonomy doesn’t need to resemble what we use on Earth—especially since it wouldn’t make sense to use Greek or Latin words if those languages never existed on your fictional planet. Still, it can be fun to sort your plants into groups and utilize some kind of consistent naming system. Understanding taxonomy on earth can help you get a good idea of how to do this.

Have fun, and get creative!