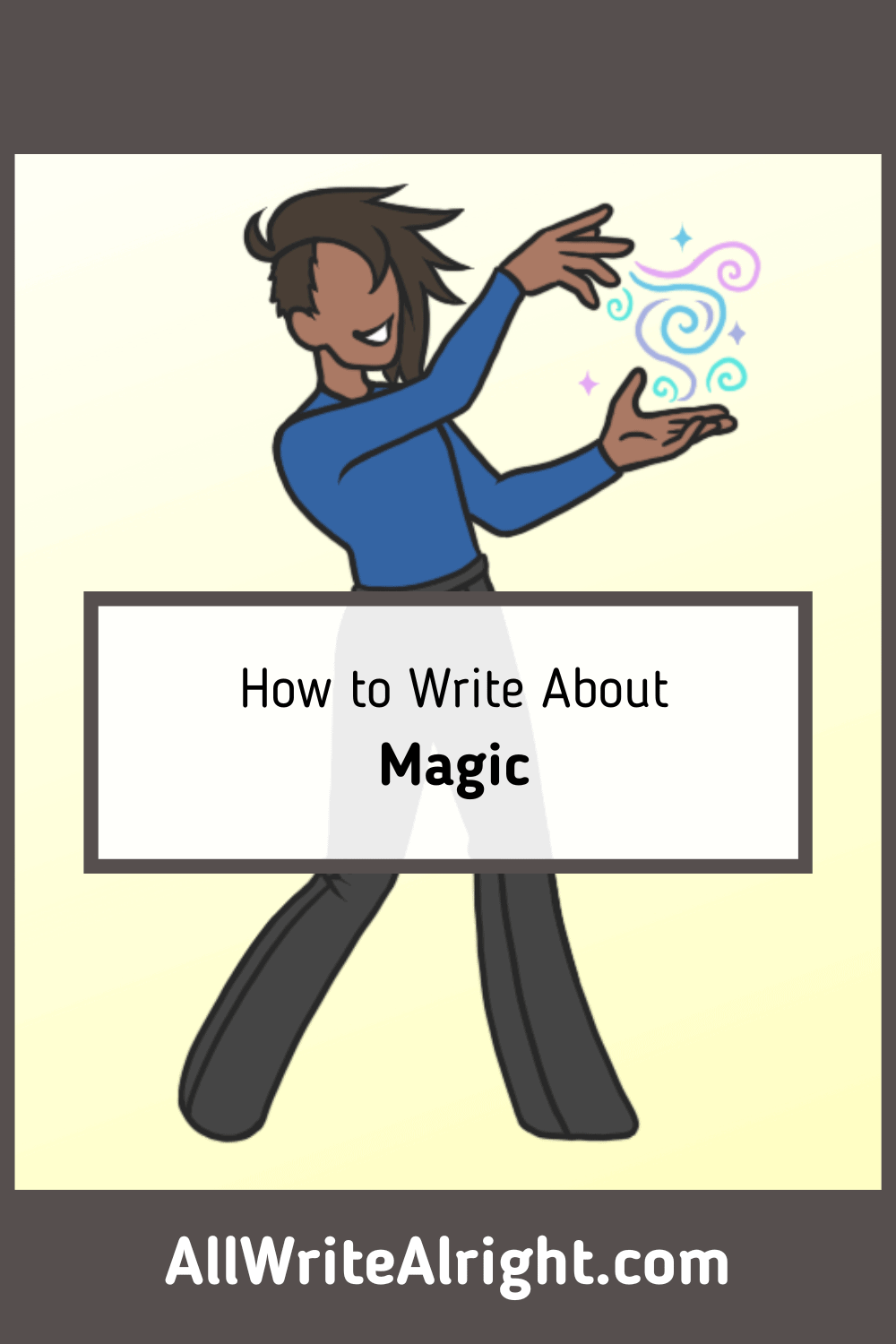 Who doesn’t love a story with magic? Whether it’s a lighthearted tale with unicorns and fairies, or a dark and gritty story about witches and dragons, magic has captivated audiences since the dawn of storytelling. It’s no surprise that you’re interested in writing about magic yourself!

However, magic is only limited by imagination, so there are endless ways that it could manifest in your story. The magic in The Lord of the Rings is different from the magic in Avatar: The Last Airbender after all. Not only that, but magic encompasses a lot, from spells and magical environments to many fictional creatures and even deities.

If you’re going to include magic in some form in your story, there’s a lot you’ll need to consider—but worry not! This article will break down the most important aspects of writing about magic so you can take it one step at a time.

Contents hide
1 Who Can Use Magic?
2 Who Knows About Magic?
3 The Types of Magic
4 The Source of Magic
5 How Does a Character Use Magical Powers?
6 Laws Regarding Magic
7 Magic in the Environment
8 Magical Creatures
9 Tips for Writing About Magic

Who Can Use Magic?

When it comes to writing about magic, one of the first things you should decide is who has the ability to control it. Is it something everyone possesses the ability to harness? Is it only available to a select few? Who are those few? Random “chosen ones,” the elite, or soldiers? Is it something anyone can learn, but they have to dedicate themselves to studying it? Is it an ability that some authority, like a government or deity, can bestow or take away based on a character’s behavior? Can only children use it?

Who Knows About Magic?

Another thing you should consider is whether or not magic is common knowledge in your world, or if it is kept a secret from nonmagical individuals. A major theme in the Harry Potter series is the fact that magic is kept hidden from the muggles (nonmagical people). However, in many traditional fantasy settings, magicians, wizards, and other magical individuals coexist openly with those who can’t use magic.

If you decide to hide magic from those who don’t practice it, you also need to think about how it will be kept secret, as well as who will enforce that.

The Types of Magic

As mentioned above, magic can work in all sorts of ways, such as:

Your story doesn’t have to include every type of magic, but it can. And of course, there are many, many, MANY types of magic, so this is far from an exhaustive list. After all, magic is limitless, so if you can dream of it, then you can write about it.

The Source of Magic

Answering the question of why magic is present in the world at all can be an important step in understanding it as a whole. Where does magic come from? And how does one gain the ability to use it?

One common way that magic is explained is to have it be as natural to the world as light or air. Magic exists in everything—but that still doesn’t answer the question of how a person can tap into that and use magic for themself. Do they have to draw magic out of trees? Can they channel it through meditation? Do they have to eat dirt? It’s up to you to decide.

Another common theme is to have magic bestowed by gods or spirits. This can mean the god or gods brought magic into the world to begin with, or they are responsible for individually picking out people to bestow with magical powers. Other entities that could be responsible for magic could be dragons, fae, demons, aliens, or even the spirits of ancestors who bring magic with them from the afterlife. With this origin, magic can just as easily be taken away again.

Another option is to have magic be inherent to some people, either because of their bloodline or otherwise. A person could be magical just because they were born that way, and the magic they harness comes from within the self.

Finally, magic can be a byproduct of science—or, more specifically, science fiction. For example, the characters in Maximum Ride not only have wings with which to fly, but many of them possess additional magical abilities such as telepathy, breathing underwater, invisibility, and regrowing limbs, all of which are justified by the scientific experiments they were subjected to. You could also have magical mutations occur as a result of waste dumping, likely from chemical plants or scientific facilities.

Whatever you decide, you should try to justify it to some degree.

How Does a Character Use Magical Powers?

The next thing you’ll need to figure out is how someone is supposed to use magic. Do they need a wand or staff of some kind? Are there material components to spells? Spoken incantations? How much does a person need to practice in order to gain proficiency in magic? Are there certain postures, moves, or forms required to cast a certain spell? What kinds of instructions would appear in a spellbook? Does magic take a physical toll on a person’s body or health? Does each spell have different requirements?

You should consider questions like those before you start really writing your story, since that will make it much easier to describe scenes in which someone is using magic. If you don’t even know how it works, how are you supposed to write about it anyway?

Next, you should consider how magic is moderated. Are there certain magical skills that are looked down upon? Are there laws against specific spells? What about restrictions regarding who can use certain spells—or even any magic at all? What are the laws regarding curses and blessings (if those are possible in your magic system)?

What are the justifications for these rules? Are some magical abilities dangerous? Do these laws benefit the elite or contribute to unbalanced power structures? Are some spells cruel or unjust? Do the gods arbitrarily decide who can and cannot use certain magic?

Remember, you also need to decide what the consequences are for breaking these rules, as well as whose job it is to enforce them. If a person curses someone and breaks a magical law, who is going to punish or correct them? What does that punishment look like, and who administers it? Gods? A magical law enforcement group? Individual mercenaries?

Magic in the Environment

In many magical stories, it is not just the characters who possess otherworldly abilities. The setting can also play host to a variety of different magical landscapes.

There are no real limits to the kinds of magical landscapes you can create, but here are some ideas to start with:

In addition to the landscape itself being magical, it could also host many mythical and magical creatures, like dragons, chimeras, mermaids, talking animals, and more. Really, anything you can imagine can be made into a magical creature for your story.

This is definitely easier if you include well-established mythical creatures like goblins and centaurs, but if you want to come up with your own fictional species to include in your magical world, you should check out The Ultimate Guide to Creating a Fictional Species. There, I break down the process of creating a new species into manageable steps, so you don’t have to worry about forgetting anything.

Tips for Writing About Magic

Magic is inherently supposed to inspire wonder and creativity. It is meant to entertain, to transport readers away from reality, and expose them to something entirely new. Magic is a plot device that allows you to explore problems in a unique way, and to write about solutions in ways you couldn’t do otherwise. If your story can fundamentally exist without magic, you shouldn’t include magic in the first place.

Additionally, magic has to have limits. If every problem could be solved with a snap of the fingers, there would be no conflict. Without conflict, a story has no soul or substance, and is, dare I say it, boring. If you’re writing about magic and it’s boring, you need to reconsider what magic is capable of, and what its shortcomings are.

Remember that not being able to use magic in a magical world can be a major source of internal conflict and motivation. One of my favorite tropes that appears in magical stories is the nonmagical best friend who is able to accomplish something the others can’t, due to their unique way of approaching problems. Having to work hard in a world where magic can solve most problems would give them a unique mindset that their magical friends would lack. Every character should have their own strengths, even if they aren’t obvious at first.

Go out there and create something magical, writers!