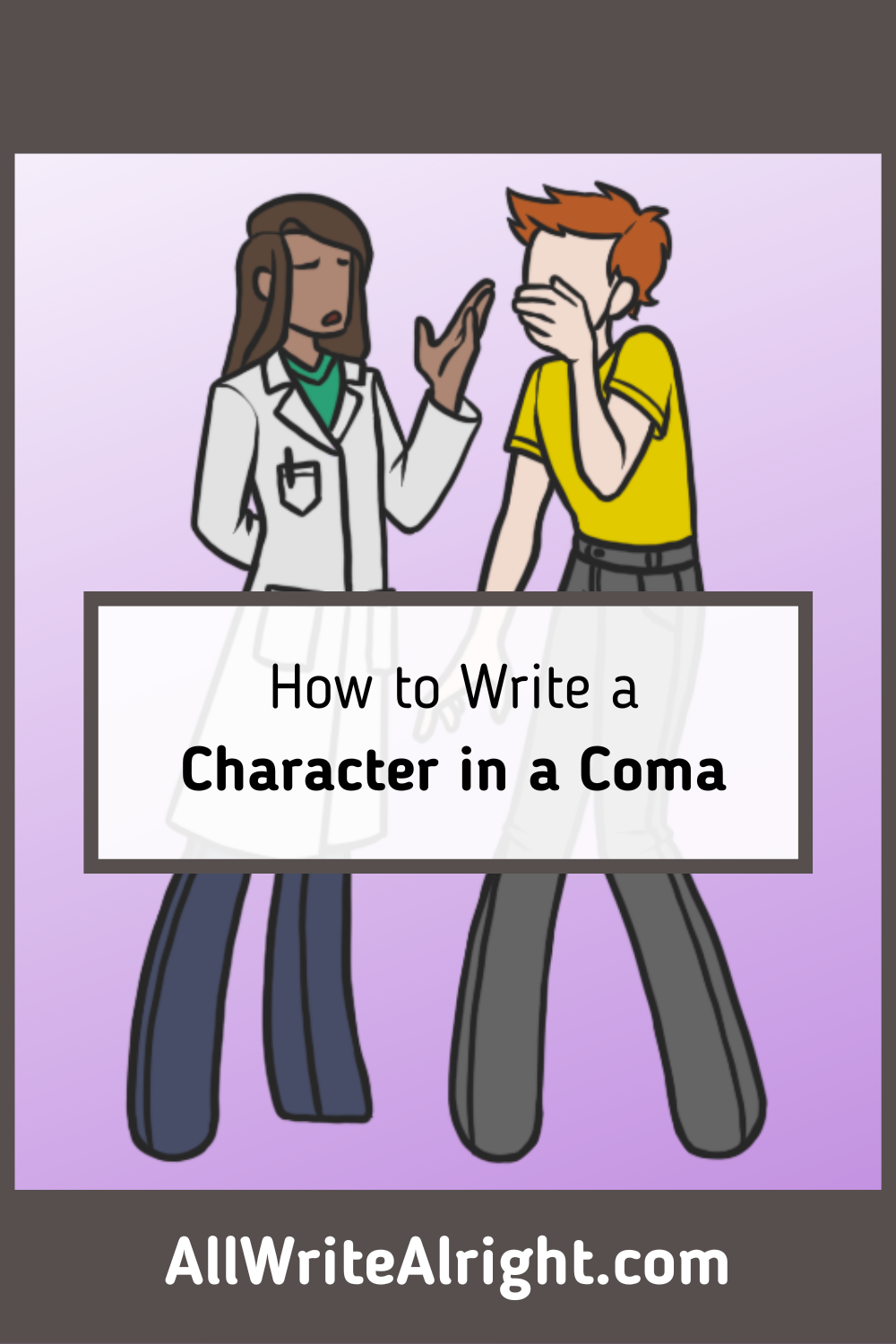 Comas are inherently dramatic, and a popular trope for fiction of all mediums and genres. Despite this, many people who try to include a coma arc in their story end up getting a lot of things wrong. Comas are complicated medical situations with varied outcomes for each individual case. If you use the same formula for writing about comas as everyone before you, you’re going to end up with a relatively dull, medically inaccurate depiction of what should be a major emotional development in your plot.

This article was originally part of the How to Write about Brain Damage (Accurately!) article. Check out that article first if you want all the context!

What is a Coma?

A coma is a prolonged period of unconsciousness, during which a person will be unresponsive. That means they will be unable to speak, move, or wake up. They will not react to stimuli (such as being poked or prodded) at all.

Often, comas are the result of damage to the brainstem or cerebellum (a small section of the underside of the brain). Widespread or severe brain damage affecting other parts of the brain can also result in a person slipping into a coma.

However, brain damage is not the only reason a character could end up in a coma.

There are two main kinds of coma that you’ll need to know about: medically induced comas, and comas that are a direct result of Traumatic Brain Injury (TBI).

A medically induced coma (also called a therapeutic coma) is a coma brought on by specific medications (barbiturates, otherwise known as sedatives).

Doctors induce comas in patients while they are recovering from a particularly gruesome head injury or extensive neurosurgery. The purpose of this is to reduce swelling in the brain by decreasing its electrical activity, which promotes better blood flow and prevents further damage. Most automatic functions, such as breathing, cease, so a character in a medically induced coma will be reliant on machines to keep them alive during this time.

Another reason a character could be put in a medically induced coma is if they have been severely burned. A person suffering from severe burns may be kept in a coma while they recover to spare them the agony of their injury. If you want to know more about writing about burns, check out How to Describe Burns in Writing.

Other reasons a character could be put in a coma include stroke, epilepsy complications, and severe physical trauma.

The number one cause of comas is brain damage.

A coma that directly results from traumatic brain injury is a serious concern, because it means that the damage to the brain is so severe that it ceases to function.

Typically, coma occurs with damage to the brainstem, but severe or widespread damage to other parts of the brain can lead to this as well. A person may be alert for a period before they slip into a coma, or they could immediately lose consciousness following their traumatic injury. Either way, if they cannot get to a hospital quickly, their prospects are not good. Since breathing and heartbeats rely on the brainstem to function, even minutes away from medical assistance could result in death.

How to Write a Character Waking Up from a Coma

Everyone knows that the point when a character wakes up from a coma to see all their loved ones clustered around their hospital bed is the most emotionally charged scene of the entire plot arc. However, waking up from a coma is not as simple as movies make it seem.

People actually go through several distinct stages as they are waking up from a TBI-induced coma, and this process can take an extremely long time.

The timeframe for recovery can vary wildly depending on many different factors. One person may recover within a matter of weeks or months, while another person with a similar injury could be comatose for over a year. Similarly, the length of time spent in each of these stages will vary per person and could range from a few days to a few months (and in rare cases, years).

Recovery also comes and goes in stages, so a person may show marked recovery and then plateau for a long stretch of time. Just because a person hasn’t shown signs of recovery for months does not mean they won’t suddenly start recovering again.

The first stage is the coma itself, where a person is entirely unconscious, unresponsive, and unaware of their surroundings. They cannot wake up, no matter what kind of stimulus they are exposed to.

The second stage is called stupor, and although it closely resembles a coma, it can be a sign that recovery is imminent. A person in a stupor will be unconscious and unaware of their surroundings, but they may wake briefly with persistent stimuli. If they are left alone, they will lapse back into unconsciousness.

The third stage is called the vegetative state. The person will be unconscious most of the time and unaware of their surroundings, but unlike in the first two stages, they will have sleep-wake cycles and will lapse between periods of unresponsiveness and alertness. They may open their eyes, smile, groan, sigh, and make other sounds or expressions, but they will not be able to move purposefully, speak, or focus on things. They will not understand speech, and will not generally respond to things in their environment.

The fourth stage is called the minimally responsive state, and it is characterized by the person regaining some level of awareness of the world around them. They may focus on things in their environment, watch moving objects, respond in some way to verbal stimuli (such as following commands, turning their head towards the speaker, or reacting emotionally), or move their body with some level of intention and purpose.

At this stage, they may not be aware all the time, will likely be incomprehensible, and will not have complete control over their body or mental processes. Regardless, they may regain some sense of self and bias, and react more positively to certain individuals they recognize than to strangers.

The final stage is called the post-traumatic confusional state. At this point, the patient would be fully awake and aware of their surroundings, and they may regain many of the bodily and mental functions they had prior to their injury. They will likely be able to speak to some degree, move their body with intention and purpose, and react reasonably to different kinds of stimuli. However, they will likely behave inappropriately, suffer from some degree of delirium or delusion, appear disoriented or incomprehensible at times, and be unable to recall basic facts or memories about their own life. Their recovery may end up being a lifelong process.

Memory problems are also common in this stage, and this is referred to as post-traumatic amnesia. If you want to learn more about amnesia, then be sure to check out How to Write a Character with Amnesia.

This is the stage that is most commonly considered to be when the person officially “wakes up” from the coma, since this is when they are able to hold a conversation and be aware of their surroundings. If you need help conveying how the character comes to their senses after being minimally conscious, then you could find some helpful tips in my other article, When and How to Write a Character Waking Up.

Of course, not everyone wakes up from a coma. In some cases, the brain will be unable to repair itself, causing brain cells to die and electrical activity to cease. Once a person becomes brain dead, they will never be able to wake again, even if life support can keep their heart beating. Once the brain dies, the person is gone forever.

It’s not always easy to tell if a person is in a regular coma, or if they are brain dead, but physicians have ways of determining this beyond a reasonable doubt. Doctors use these various tests to figure out if a patient is brain dead or not:

If any of these tests result in some kind of reaction from the patient or any level of brain activity can still be detected, the patient cannot be diagnosed as brain dead. If there is any doubt at all, the determination of brain death cannot be made.

Additionally, even after a determination of brain death has been made, the hospital must wait for a reasonable period of time before the patient can be removed from life support and autopsied or prepared for organ donation. This length of time is usually about 6 hours, but the time can be modified depending on the patient’s individual situation. This waiting period is intended to completely eliminate any possibility of recovery before a determination of death.

If, after the waiting period is over, the tests still show there is no brain activity, then the person is officially declared dead.

If you intend to kill one of your characters this way, I recommend checking out A Guide to Killing Your Characters. It can help you figure out how to handle writing about the things leading up to, and the aftermath of, a major character’s death.

It can be challenging to write about comas, but with appropriate research and a compassionate approach, you can create a story with emotional depth that your readers will remember for years to come.