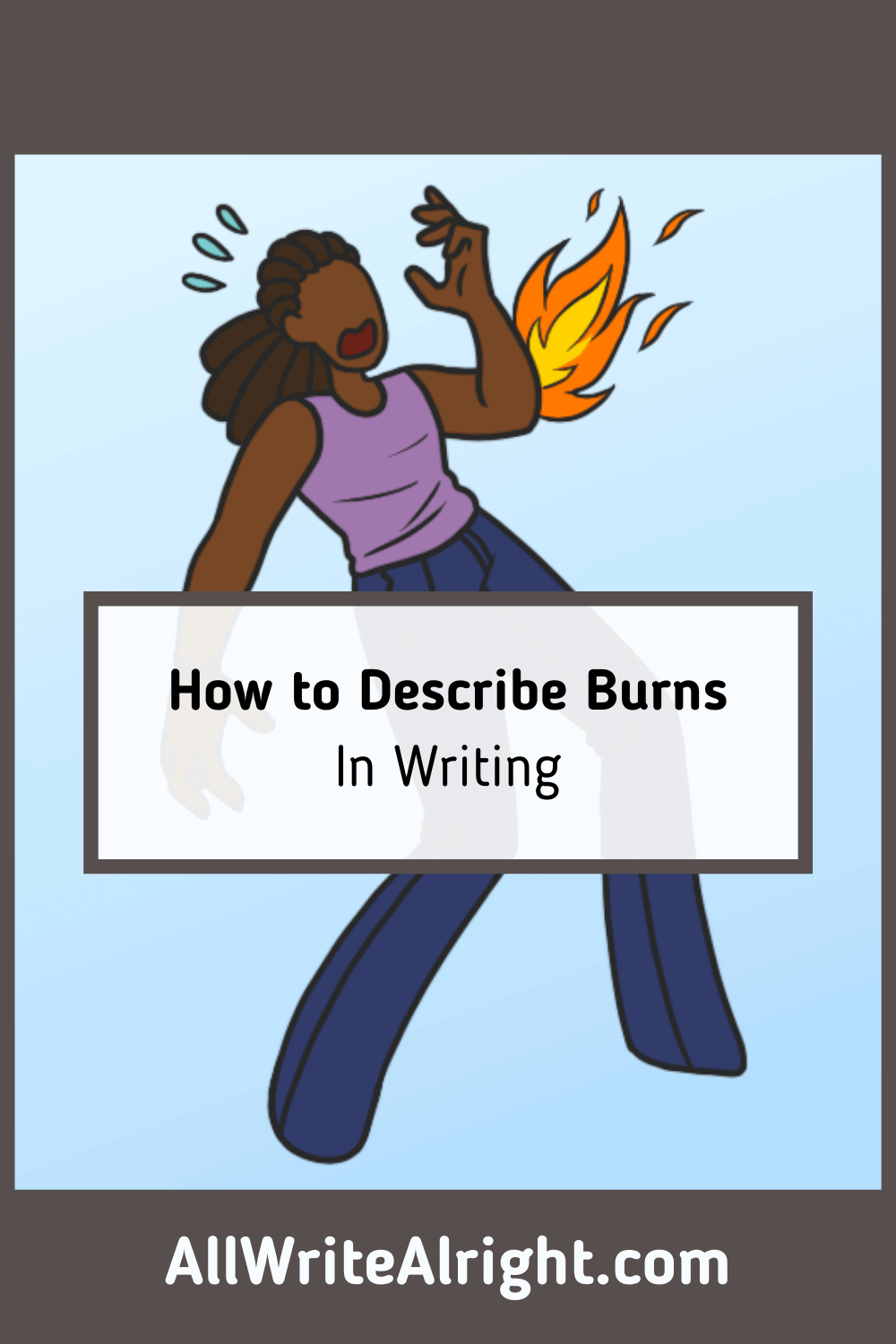 Researching traumatic injuries is not fun. Even if you can handle fictional characters in pain, reading up on real descriptions of gruesome injuries can be emotionally taxing. Because of this, many writers don’t do the appropriate research before writing an injury into their story, and the resulting scenes end up feeling inauthentic and scientifically questionable.

Burns are a favorite type of injury in the writing community because they leave iconic scars behind, and they tend to hold more symbolism than other types of injuries. If you want to write about burns in your story, you should first make sure you understand how burns affect the human body.

A word of warning: some language and descriptions may be upsetting if you are sensitive to blood, gore, or grotesque imagery.

READ AT YOUR DISCRETION.

Contents hide
1 How are Burns Classified?
2 How to Describe a Character Being Burned
3 How to Describe Burns
4 How to Describe What Burns Feel Like
5 How to Write about Treatment for Burns
6 How Long it Takes Burns to Heal
7 How Deadly are Burns?
8 The Emotional Impact of Burns on Your Characters

How are Burns Classified?

Burns are categorized based on the depth of the tissue affected by the burn.

How to Describe a Character Being Burned

When skin gets burned, it turns bright red and gets swollen, as blood rushes to the area to try to repair the damaged cells. If the area continues to burn, moisture in the skin will evaporate, leaving it looking red, dry, and pulled tight. From there, it will bubble, blister, or even split open and bleed. After that, the skin will begin to blacken and char if exposed to a hot surface or direct flame, or will turn an ashy, milky-white color if it is in prolonged contact with boiling liquid. If the heat source is not eliminated, the flesh will slowly burn away, burning through muscle, and even bone.

The way you describe a scene in which a character gets burned will depend heavily on the genre of the story you are writing.

If you’re describing a character getting burned in a horror story or other mature genre, don’t shy away from the gruesome details. Burns are uniquely horrifying to experience and witness, and the visuals are scary, disgusting, and upsetting. Don’t be afraid of describing the sheets of skin sloughing off the body, the blackened chunks of flesh hitting the ground and continuing to smolder, and blood bubbling and steaming as it spills out from the wound.

Keep your target audience in mind, though. If you’re writing Young Adult fiction, you should ease up on the grotesque imagery. You can keep the description vague, and use terms such as “unrecognizable” or “disfigured” to describe the burn, rather than going into the details. Explain how the flames cling to the character’s clothes no matter how they try to frantically extinguish them. Describe how the character behaves and thinks, rather than focusing on the wounds themselves. You can utilize emotions to heighten the tension and make that the focal point of the scene.

It’s important to keep in mind that the visuals are not the only important part. Some of the most memorable aspects of a burn are how it smells, and how it sounds. The smell of burning flesh and the crackling sound of their skin splitting and blood sizzling will likely stick in the character’s memory for the rest of their life.

Make sure the description you write matches the genre you’re writing in. You never know what your readers have been through, and you don’t want to drop a gruesome description for a traumatic injury on them when they aren’t expecting it.

How to Describe Burns

Another warning: this section is particularly gross. It is meant to be very visual and detailed, so you don’t have to look up images of wounds in order to describe them.

After the character has been moved away from the heat source, their wound could end up looking like a variety of different things. The way the burn looks will depend on the severity, location, and cause.

If the skin is intact, the wound could appear red, bumpy, and extremely swollen. Blisters anywhere from a few centimeters to a few inches in diameter could appear across the entire affected area, and the skin will appear to have a glossy sheen to it.

In more severe cases, the external layer of skin will split open and actually separate away from the layers beneath it. The top layer will look pale and papery, and can be shifted around freely since it is only attached at the edges, while the skin underneath will look raw, shiny, and splotchy.

Third and fourth-degree burns look much more gruesome, but exactly how they look depends on the cause of the burn, the temperature, and how long the character is exposed. For example, a hot flame would result in a blackened, bloody, flakey wound. A lower temperature over a longer period of time, such as proximity to fire (instead of actually being on fire), will actually end up slowly cooking the body, making the wound resemble a steak or beef jerky. The skin will also look leathery, or split and curl away from the tissue below it. Boiling water burns tend to look pale, blotchy, glossy, or gooey. With fourth-degree burns, it is not uncommon for tendons and bones to be exposed as well.

Bodies are made of meat (sorry to put it so bluntly), so just imagine what would happen to a steak or a chicken if you cooked it at 1000 degrees Fahrenheit, boiled it, or set it on fire.

If the character’s burn becomes infected, then it will swell up again, and white fluid will build up under the surface of the skin and around the wound. This fluid could also be yellow, green, brown, or even black, and it will smell bad—like ammonia, or spoiled fruit.

What a burn feels like depends entirely on how bad the burn is.

How to Write about Treatment for Burns

Minor burns are treated with topical antibiotics, lotions, aloe, ice, and by keeping the burned area elevated above heart level whenever possible. If the skin blisters, the blisters should be left alone until they drain on their own, then they should be disinfected and covered.

Third-degree burns will usually not heal on their own, and may require a skin graft or other surgery to heal properly. Then, the wound is covered in bandages to hold it together while it heals.

Fourth-degree burns will not heal on their own, and in severe cases, not even a skin graft will help. Serious reconstruction is required, though amputation may be the only (or the best) option in some situations. Either way, if your character suffers a burn like this, they will likely go through surgeries and physical therapy for the rest of their life, and be forever changed.

When a burn is caused by a harsh chemical or acid, then the acid would need to be completely washed off, or it will continue to burn the skin. If the characters know what chemical caused the burn, then they can neutralize the acid before rinsing it away. If not, the best course of action would be to run the wound under cold water for 20 minutes. The water may spread the acid over a wider area, but it is better to rinse it away than to let it sit on the skin.

How Long it Takes Burns to Heal

First-degree burns heal in about 1-2 weeks.

Second-degree burns heal in about 1-3 weeks.

Some skin grafts are rolled out to fit over a larger area, without increasing the size of the donor wound. These grafts have a fishnet pattern due to the way they are stretched, and the scar may retain that distinctive pattern.

For fourth-degree burns, the time it takes a wound to heal depends on the severity of the wound, and the treatment used. In many cases, victims will never fully recover.

How Deadly are Burns?

There are many many different ways a burn can be deadly.

Just about any kind of severe burn can cause a person to go into shock. Even in a hospital, shock has a 20%-50% mortality rate, depending on other factors.

Burns that affect the face and chest may restrict breathing, leading to asphyxiation.

Burns that cover a large area can result in lethal dehydration and kidney failure. This may also lead to complete organ failure.

If a burn injury is not treated properly, it may become infected, and that can lead to a deadly immune response known as septic shock.

Complications from surgery, or botched surgery, could also result in death. Depending on the setting, the character may not have access to appropriate medical care, and an otherwise survivable injury could become deadly.

Not to mention, depending on the conditions in which the character is burned, they may be in more immediate danger from inhaling smoke or toxic chemicals than from the wound itself.

If killing your character is your goal, you should check out this other article when you’re done here: A Guide to Killing Your Characters.

The Emotional Impact of Burns on Your Characters

Burns are incredibly traumatic injuries. Not only do they often result in life-altering physical damages and obvious scarring, they often cause Post Traumatic Stress Disorder (PTSD). If you don’t acknowledge the emotional trauma of surviving a terrible burn, you are missing a great opportunity to add complexity and unique development to the character.

On a similar note, you shouldn’t just maim your characters for the hell of it. If the injury doesn’t change anything, then it doesn’t need to be included. A severe injury should only be included if it helps develop the plot or the characters, and it should never be used as a cheap trick to make a scene more exciting.