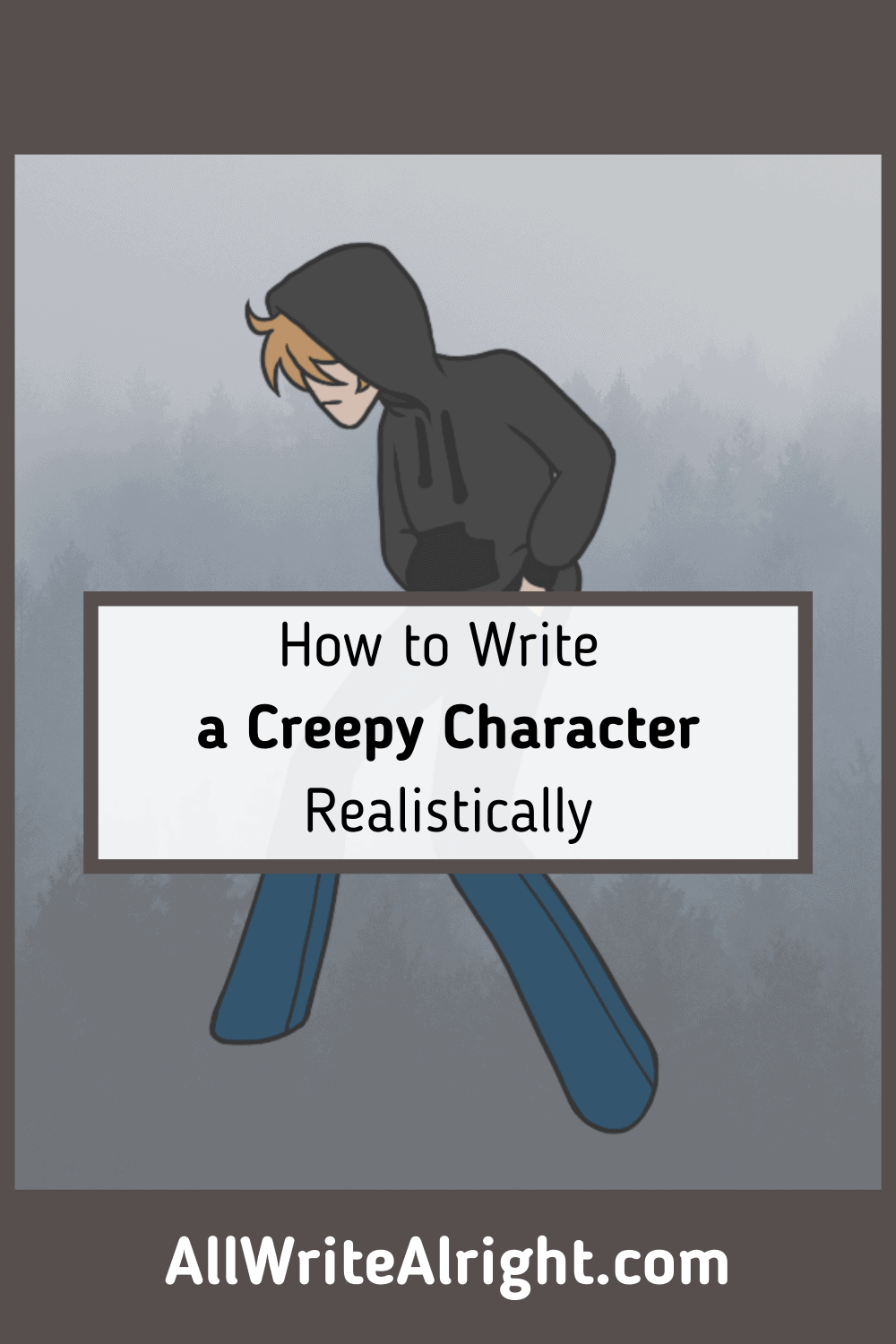 Sometimes, a story just needs a creep. Whether you need to creep out your characters for a brief moment, or foreshadow the development of a major antagonist with creepy behaviors, you need to be able to effectively write a creepy character. However, that isn’t always as easy as it sounds. How can you create a character that’s so creepy that you don’t even need to acknowledge that for your readers to pick up on it? And where should you draw the line to keep the character realistic? Well, fortunately, there are some simple behaviors that you can give your creepy characters to make your readers squirm.

Contents hide
1 What Does it Mean for Someone to be “Creepy?”
2 Different Kinds of Creeps
3 The Most Important “Creep Factor”
4 How to Design a Character that Gives Your Readers the Creeps
5 How to Make a Moderately Creepy Character
6 Other Techniques for Making a Character Seem Creepy
7 Be Careful with Your Creeps

What Does it Mean for Someone to be “Creepy?”

First of all, you need to understand what exactly it means for someone to be “creepy,” or more accurately, what it means when you get creeped out by someone. Basically, when you get creeped out by someone, that means that there is something about them that is making you (consciously or unconsciously) perceive them as a threat to your personal safety. It is your brain’s way of warning you that there is something unpredictable, unsettling, or dangerous about that person, and it is unable to decide if that person should be feared. This typically manifests in awkwardness, confusion, or unsettlement, and you typically resolve it by getting as far away from the creepy person as possible.

This works a little differently in a fictional story. Readers cannot form that same connection with written characters that they can with real people, or even actors in movies. Instead, you need to make readers suspicious of the intentions of the creep in regards to the characters they are interacting with. You need to make your readers afraid on behalf of the main character, regardless of if the character is aware of, or oblivious to, the creepy behaviors of the other character.

Now that that’s out of the way, you need to understand that there is more than one way to write a creepy character. Creeps come in all shapes and sizes, and their reasons for their creepy behavior could be sinister or entirely accidental. In addition to that, many factors that people perceive as creepy are things that people cannot help, such as appearance or gender. For example, men are far more likely to be considered creepy than women, and physical attractiveness plays a large role as well. People can even disagree about what they consider to be creepy.

Depending on the character, the setting, and the story you are writing, being a “creep” could have wildly different connotations. In one story, a creep might be a suspect in a murder case, while in another, a woman could feel threatened by her creepy blind date. Or, the creep in question could simply be a teenage boy trying to fit in at high school.

Creepiness can even be a good thing! Some of the most beloved characters in media come across as creepy characters, such as Stein from Soul Eater or the entirety of the Addams Family. Misunderstandings can also work in your favor, as your protagonists can experience character development as they learn to accept and befriend those who appear different from themselves.

Regardless of the reasons for acting creepy, there are a few techniques you can use to really make your creep give readers and other characters the chills.

The Most Important “Creep Factor”

Before we move on to the vague list of traits and behaviors you could attach to your creepy character, I wanted to set aside a space to talk about the single most important factor for making a character creepy.

When a character is unpredictable, that inherently creates a sense of potential danger, and therefore makes them creepy. If you never know what they are going to do next, then you cannot ever trust them. You won’t ever know what’s going on in their head, if they are thinking about what they are doing, or if their behavior is completely accidental and impulsive. The most dangerous kind of creep is the one that you cannot predict.

Just don’t fall into the cycle of making them predictably unpredictable. If they always act like a disaster, or if all their decisions follow a similar way of thinking, then it won’t have the same effect on readers as the story progresses. You need to make sure that you are effectively surprising your readers (and your characters) every time, otherwise, it’ll lose its effect.

How to Design a Character that Gives Your Readers the Creeps

Now, when you are creating a character that you want your readers to perceive as creepy, you can’t take the easy way out. DO NOT have your characters tell your readers what to think by saying things like “there was something off about him” or “he was acting weird.” If you have to tell your readers that explicitly, then you need to rewrite your draft.

No one wants to be told what to think about a story; they want to experience it for themselves and make their own inferences about the characters and the storyline. There is something rewarding about reaching a point in a story and being able to exclaim “I knew it” when a foreshadowed plot point finally gets revealed.

DISCLAIMER: It is important to keep in mind that this list is curated from interviews and people’s accounts of what they consider to be “creepy.” Unfortunately, many of these traits align with symptoms of depression, anxiety, Autism, OCD, BPD, and many other conditions. This is because society generally views anything outside the scope of what is considered “normal” to be wrong, scary, or upsetting. Remember that these traits alone are not enough to make a person creepy—they are only part of the strategy.

To make a character a bit more unsettling and potentially reveal more about their creepy nature, consider giving them one, two, or many of the traits and behaviors listed below:

Too much intelligence surrounding a particular topic, especially a topic that is considered to be “taboo” by most of society, could give your character a creepy vibe. My other article Simple Tips for Writing Genius Characters could help you craft a unique genius character that you could use to freak out your readers and other characters alike. Who knows? Your story might just need a creepy scientist or unhinged inventor.

How to Make a Moderately Creepy Character

Now, this might all feel a little extreme to you, especially if your character doesn’t fit the description of being your average run-of-the-mill creep. Maybe they’re more suave, and their creepiness comes from a slight inkling of their bad intentions. Maybe they’re wise to their own creepiness, and they use that to their advantage. Or maybe, you just want to make a character who is only sort of creepy, but you don’t want to get too extreme.

Here are a couple of tamer ideas for behaviors to keep your creeps realistic and subtle:

If you keep things in moderation, you might not have the same immediate effect on readers, but you have the opportunity to slowly build the creepiness up over time. Choose whatever you need for your character, to make them what you need them to be in the story.

Other Techniques for Making a Character Seem Creepy

This might come as a surprise, but the character’s individual personality and behaviors are not the only aspects that matter when it comes to making them appear creepy. There are several other ways you can manipulate a reader’s subconscious to make them perceive a character as creepy.

One of the ways you can do this is with the words you use to describe them. Everyone knows that some words with similar definitions have wildly different connotations. For example, “coerce” and “compel” mean the same thing—to persuade an unwilling person to do something. However, “coerce” has much more aggressive connotations, and seeing it used can automatically influence your reader’s perceptions of the scene.

There are many ways this can apply to a character. You can use unsavory words to describe their behavior, the way they speak, and even their surroundings.

Take a look at these two examples:

“His face lit up with a grin”

“A smile stretched across his face.”

The first example’s use of the phrase “lit up” likens the character’s smile to sunshine, which is bright, warm, and familiar. This creates a subconscious, positive impression of the character. Alternatively, the second example’s use of the word “stretched” creates an uncomfortable image, and can even give off the impression that the gesture isn’t genuine. This contributes to a more suspicious impression, which can make a character seem creepier.

Another thing to consider when making a creepy character is their knowledge of the story so far. If a character knows too much about the characters, their quest, or their past exploits, then it will seem like they have been stalking the characters. It’s always creepy when someone knows something they shouldn’t. Likewise, when they appear in the story can also impact their creepiness. If they only appear when the main character is alone or particularly vulnerable, that’s going to give off “creepy” vibes. The setting and context of the creepy character’s appearances in the story can have a massive impact on how they are perceived.

Be Careful with Your Creeps

As always, I’m going to leave off with a word of caution. Just because someone is different does not mean they are dangerous. If you aren’t careful about how you present your creepy characters, you could end up spreading harmful misinformation about real mental and neurological conditions. By associating certain behaviors with dangerous or suspicious characters, you participate in altering your readers’ perceptions of those behaviors. Whether you intend for this or not, this association can end up further stigmatizing Neurodivergent people and those who suffer from mental illnesses. You could play a part in demonizing the behaviors of people who often just need help and understanding. So—tread carefully.

You never know how impactful your story could end up being.