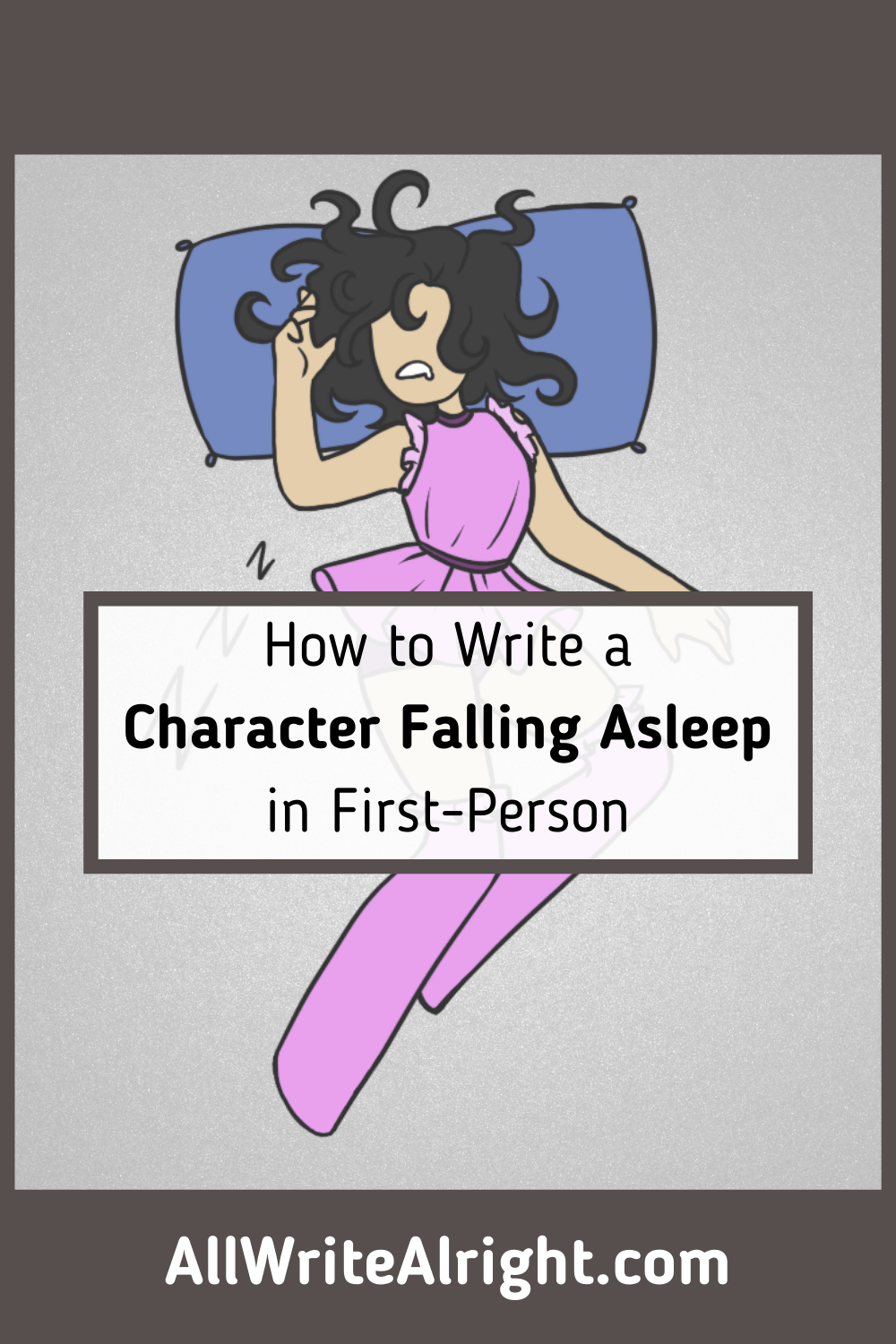 It can be tough to write a character falling asleep. Falling asleep isn’t something that you can be very aware of as it is happening, so it can be difficult to really capture the feeling. Because of this, writers have devised all sorts of techniques to avoid writing it, but that’s thinking about it the wrong way. You should never shy away from a challenging scene, especially if taking the easy way out could interrupt the way a reader experiences your story.

One of the most frustrating situations is when your story is at a standstill because you don’t know how to write a particular scene. Writer’s block can stop a story in its tracks, and sometimes, if the situation is difficult enough, it can prevent the story from ever getting finished.

Contents hide
1 What is “Fade to Black?”
2 The Consequences of Sleep Deprivation
3 The Science of Falling Asleep
4 How to Show a Character Falling Asleep in First-Person
5 Some Parting Thoughts

What is “Fade to Black?”

Writers have a favorite trick when they don’t want to write a scene or transition, and that’s what is colloquially known as “fade to black.” The idea is based on a cinematic technique where a scene quite literally fades out to a black screen, and people just took the concept and applied it to their written stories.

The problem with this, of course, is that written stories don’t have any visuals, so the effect has to be achieved by manipulating a reader’s visualization of the scene. This is often done by trailing a scene off in a vague summary that finishes an action or interaction quickly, and lets the reader drift away on imagery until the scene feels distant. Then, when the scene ends, it doesn’t feel abrupt, and instead seems to fade away in the reader’s imagination.

There are times when it can be appropriate to utilize this technique in writing, especially to gloss over less interesting elements of a story like uneventful travel. It can also be a good way of softening the transitions between chapters. In most cases, however, a fade to black is used to skirt around a topic that a writer isn’t comfortable with writing. Some scenes are just more difficult to write than others, but that doesn’t mean you shouldn’t try to write them.

If you are writing about the character falling asleep as a way of leading into an important dream, or to have something happen while they are asleep, then a fade to black might be the best choice for you. This is a situation in which you will need to use your best judgment to decide what is best for your story. However, there are a few other ways you can approach writing that scene.

The Consequences of Sleep Deprivation

Sleep is unavoidable. You can’t just have your characters traipsing around for days without stopping to rest—that isn’t realistic! After being awake for more than 24 hours, your characters should be significantly compromised. They would have a hard time remembering things, seeing patterns, or solving problems. They would have difficulty driving a car or using guns, and anything else that requires a steady hand or prolonged focus is most likely going to get botched.

Not only will the sleep-deprived characters have difficulty with cognitive tasks that would ordinarily be easy for them, but they will also likely struggle with:

Characters with insomnia are going to be feeling like this quite often. If you want some pointers for writing about that, take a look at Losing Sleep Over How to Write a Character with Insomnia?

The Science of Falling Asleep

Now, what exactly happens when a person starts to fall asleep? Well, the process begins when the brain decides that it needs time to rest, to organize the memories from the day and to clean out waste from its cells. This is usually about 15-16 hours after waking up from the previous night, but that can vary depending on how much sleep the person got before.

Neurotransmitters tell the neurons in the person’s brain when it is time to sleep by shutting off the signals that keep them awake and alert. This also causes the brain to increase the production of melatonin, which relaxes the body, slows down heart rate and breathing, and regulates sleep cycles. Light signals can also trigger this reaction to occur, so a person may become sleepy if they are left in a dark room.

How to Show a Character Falling Asleep in First-Person

Writing about falling asleep in a closed first-person perspective can be a real challenge. Falling asleep isn’t generally something you pay attention to in real life, so it can be difficult to describe what it feels like as it happens. And yet, you need to be able to do just that in order to make the reader relate to the situation as the character begins to nod off.

You should never mention that the character is falling asleep. Whenever possible, you need to show your readers what is going on instead of telling them. The best way to do that is by getting clever with how you describe the things that a character sees, feels, and otherwise experiences.

As the character dozes off, show the readers that their thoughts are drifting to other topics that don’t relate to their surroundings. Most importantly, leave out any visual details about their environment, to signify that they have closed their eyes and cannot see what is happening. Make your descriptive language wander, and focus mostly on audible or imagined sensations. Deliberately leave your descriptions vague and somewhat intangible, and have these thoughts and other dreamlike elements mingle with the things going on around them.

For example, a character could be falling asleep during a meeting to come up with a strategy for escaping a prison. She is surrounded by people she has never met before, but she is too exhausted to keep herself awake. In the middle of the discussion, she begins to nod off, thinking of her family. Surely, she assumes, her brother would be missing her. She thinks more about her brother, vaguely, but he says something about stealing keys. Did he really say that? She snaps awake when she realizes that one of the other captives said that instead, and she realizes that she was dreaming. This can go on a few more times before the dreams carry her away or the group gives up the effort and all go to bed.

Then, of course, you would need to take this idea and apply it to the correct perspective by adding in the character’s personality and changing the pronouns to first-person. Try to make the readers feel almost like they are drifting away with the character. To slow it down even more, try adding in ellipses (…) to break up the character’s thoughts and make them seem more sluggish.

It is important to consider the situation that your character is in, and how that could impact the way in which they fall asleep. Are they fighting to stay awake? Or, are they trying to get some sleep before a big event the next day? Are there distractions around to keep them awake? Has it been a while since they had the chance to rest, or did they have a nap not long ago? There are many variables to consider when approaching a scene like this, and only you can really know what is best for your story.

These variables not only have an impact on how a character falls asleep, but also the dreams that they have once they are asleep. If you want some pointers for how to write about dreams, and when it is appropriate, check out my other article: Writing About Dreams and Nightmares.

And, of course, if your character falls asleep, they will eventually need to wake up again (hopefully). For tips on writing about waking up in different situations, check out my article: When and How to Write a Character Waking Up.