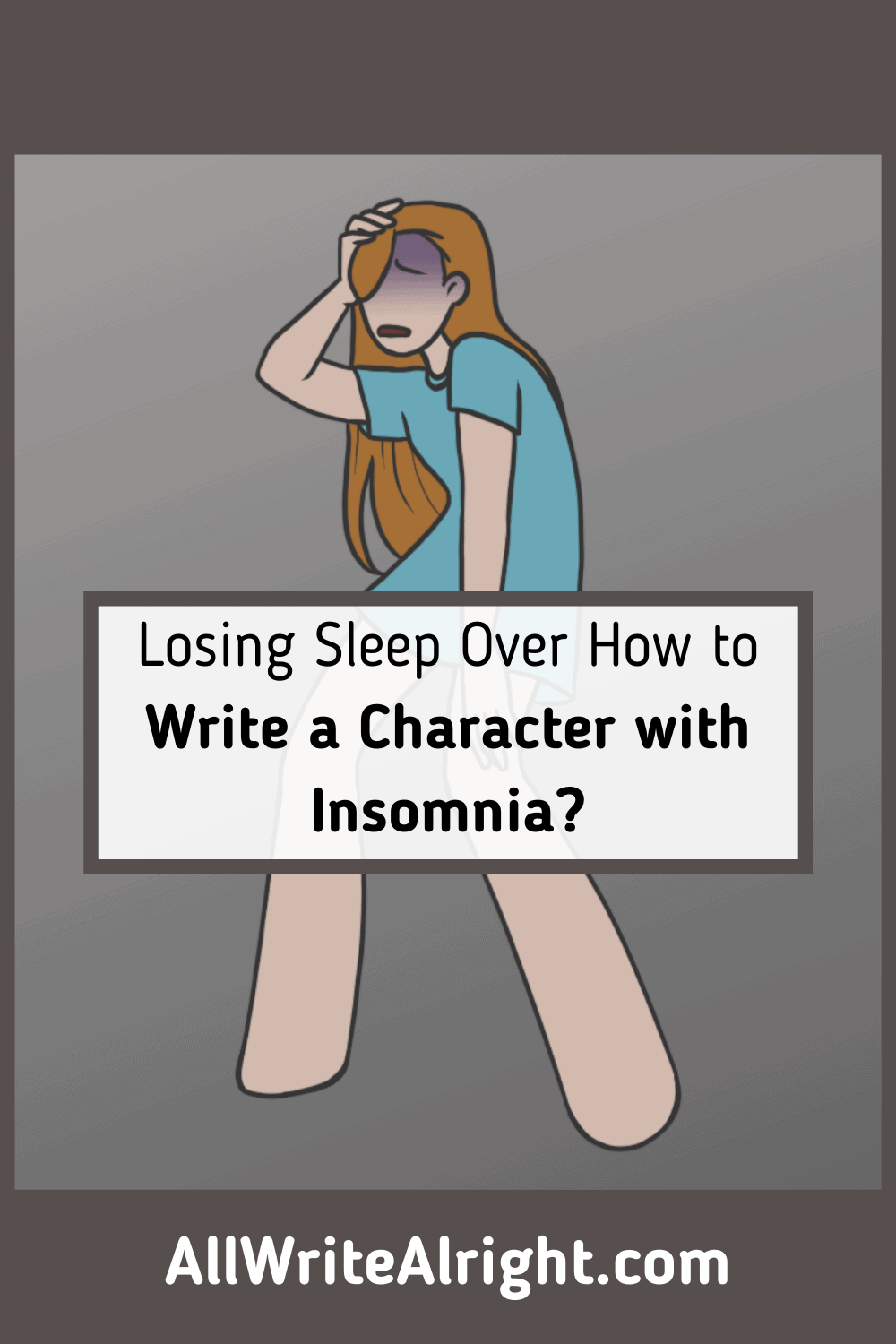 Giving a character insomnia can be a great way of establishing their personality, and that can set the stage for future internal struggles later on in the story. As with almost anything, this is better to “show not tell,” but the difficulty here is doing so in a way that isn’t mind-numbingly boring to read. Unless you can make it interesting, no one wants to read about a character laying in bed doing nothing.

When it comes to writing a character with insomnia, you need to approach the task carefully. You want to show readers enough to really emphasize the problem, but you don’t want your scenes to drag on forever. You need to find a balance, but in addition to that, you will also need to factor in some other details to make the character’s struggles as accurate as possible. To get started, a solid understanding of what insomnia actually is and how it affects people is necessary for properly portraying it in your characters.

Contents hide
1 What is Insomnia?
2 How to Write About Insomnia
3 The Different Types of Insomnia
4 What are the Symptoms of Insomnia?
5 What is Causing your Character’s Insomnia?
6 Writing an Insomniac Character in the First Person

Insomnia is a common sleep disorder that interferes with a person’s ability to fall asleep, stay asleep, or wake up well-rested. If it persists, it can have serious consequences for the person’s health, emotional well-being, and mood. Not getting proper sleep over a long period of time can result in conditions like depression, substance abuse, and heart disease. It can also increase the risk of traffic accidents due to sleep deprivation’s tendency to slow down reaction time and interfere with coordination.

If you want to learn more about how you can use sleep deprivation to influence your characters’ behaviors, I touch on this a bit more in How to Write a Character Falling Asleep in First Person.

How to Write About Insomnia

When writing a character with insomnia, you need to frame it in your story like a character flaw. What does that mean? Well, a character flaw is a personality trait, condition, or belief that makes a character’s life more difficult. It could interfere with their relationships with others, or directly impact the character’s ability to achieve their goal. Flaws are interesting ways of adding complexity to characters and conflict to storylines.

To put it simply: insomnia doesn’t just exist when it’s convenient. If you give a character insomnia, you need to understand that it is going to come with consequences. Your character is going to have more trouble shooting straight, focusing on things, and staying calm under pressure. They might be more argumentative, and make many more stupid mistakes when they are tired. If you give a character any kind of condition, you have to show how it negatively impacts how they function; to do otherwise glamorizes a condition real people suffer from.

Flaws are a complicated aspect of character creation, but they are tremendously important for a number of reasons. If you want to make your characters more interesting, sympathetic, and likable, then you should also check out How to Create Complex Flaws for Characters.

The Different Types of Insomnia

With that said, insomnia doesn’t always look the same for everyone; there are several different types of insomnia, and not everyone copes with it in the same way.

These are the different kinds of insomnia that could be affecting your character:

These categories are not mutually exclusive, however. A character could be suffering from more than one type at once. They could have a difficult time falling asleep at night, and they could struggle to stay asleep too. Acute insomnia could develop into chronic insomnia if the issues persist for long enough. It’s not unusual at all for the categories to overlap.

What are the Symptoms of Insomnia?

Insomnia can make it difficult for your character to function, depending on the severity of their condition. If you don’t make your characters behave appropriately after a sleepless night, then your writing won’t come across as authentic to your readers.

What is Causing your Character’s Insomnia?

Giving your character insomnia is a deliberate choice, and you will need to justify it somehow in their backstory. There are many things that could result in sleeplessness, so here are a few examples to give you some ideas.

Stress is the most common trigger for insomnia to start manifesting. What kind of stress could your character be experiencing that would keep them up at night? They could have witnessed something harrowing or illegal, and are kept awake by bad memories or paranoia. Alternatively, they could be going through a divorce, recovering from an injury, or having trouble in school. Anything can cause stress, and stress can cause insomnia.

Another common way for insomnia to develop is as a result of a preexisting condition, or the medications used to treat that condition. Some mental conditions, such as anxiety and depression, can keep people awake at night, whereas physical conditions may cause pain that makes it difficult to sleep.

Anger issues is a common mental condition that keeps people awake, because of the guilt and anxiety it typically results in. If that sounds like a good idea for your character, you can find more information about the topic here: Writing a Character with Anger Issues.

Some medications, like those used to treat high blood pressure, arrhythmias, inflammation, allergies, and many more conditions, can disrupt a person’s sleep patterns and result in insomnia. If your character is sick with something else, or on medication for something, then you could look into that as a potential avenue for justifying their insomnia.

As a side note, illicit drug use could also result in difficulty sleeping. Illegal drugs can have a range of unpredictable effects on the body, so that could be an easy way of justifying your character’s insomnia. Just make sure you understand all the ways that’s going to impact them before you take that option.

Writing an Insomniac Character in the First Person

I’ll go ahead and admit that I love writing insomniac characters. A lot of my stories deal with mental health and the different ways people respond to difficult situations. Insomnia is a fascinating way to delve into a character’s deeper psyche, their fears, and their truly unique perspective. And, it can be a fun way to utilize a technique known as “stream of consciousness,” which is one of my absolute favorite ways to write.

So, what does “stream of consciousness” mean?

A stream of consciousness is a method of writing that disregards descriptions, settings, and actions, to focus on an uninterrupted exploration of a character’s thoughts, feelings, and reactions. Rather than describing what is happening, you narrate what the character is thinking, giving context to the situation or setting based solely around how that character responds to it. It is a lot like a soliloquy in a play, since it reveals the inner reflections of the character to your audience. This gives readers the sense of being inside the character’s mind, and having unique insight into their understanding of the world. This is also a great way of exploring flashbacks, memories, dreams, fears, and anything that your character could possibly be thinking of as they try to sleep.

When a character is laying in bed, staring up at the dark ceiling or perhaps a slowly rotating ceiling fan, let their mind wander. Let them think about whatever is keeping them awake, and have their thoughts tumble down an unexpected path. Delve as deep as you can into who they are and what they desire. Go beyond the surface level understanding of the character, and use this opportunity to reveal a uniquely complicated and deeply sentimental aspect of their personality.