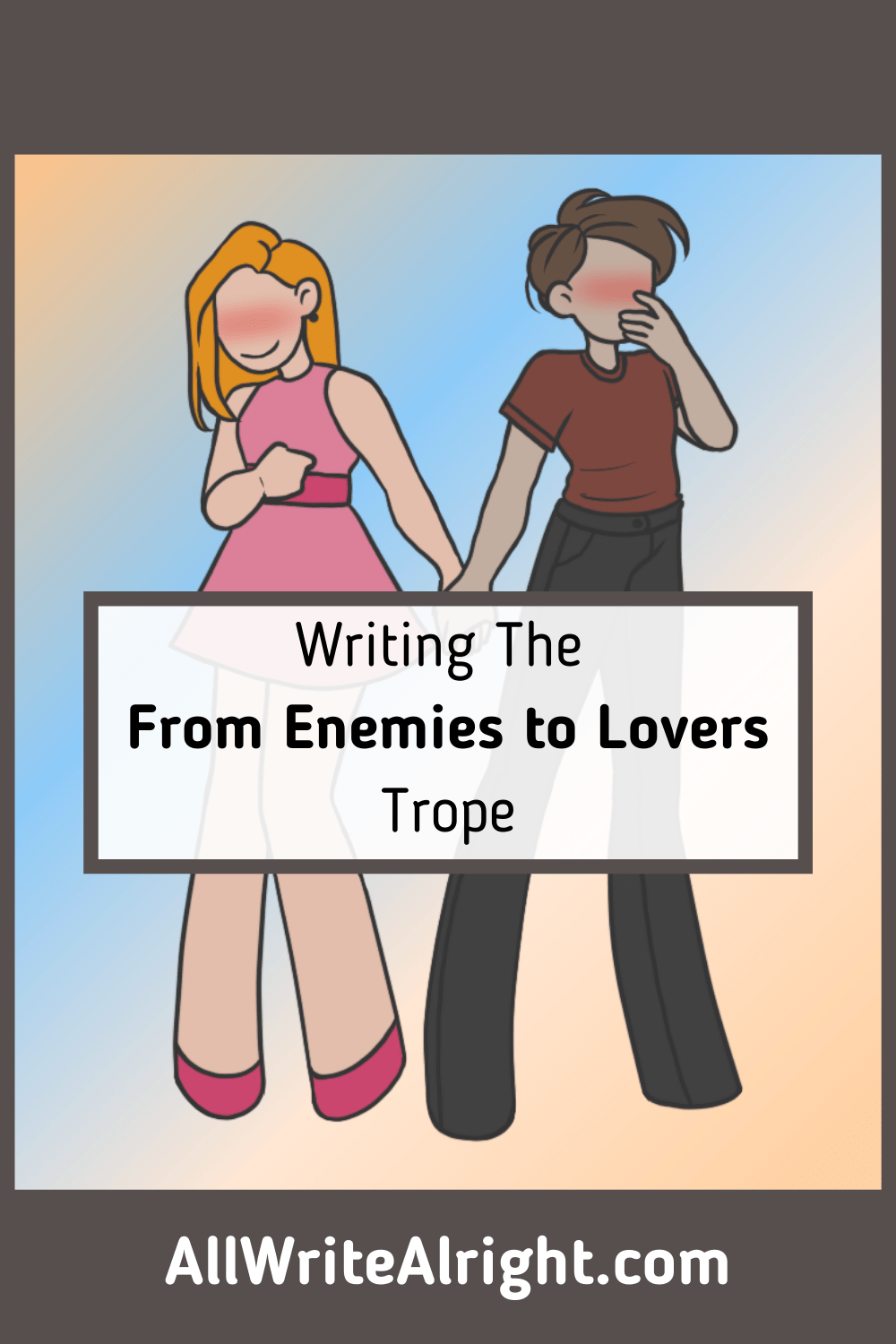 Nothing is more satisfying than watching bitter rivals slowly fall in love. The enemies to lovers trope is a popular one, and with good reason! In fact, one of the most famous love stories of all time, Romeo and Juliet, bases the entire plot around this idea. However, if you aren’t careful about how you utilize it in your own stories, your story will come across as inauthentic.

Making enemies fall in love with each other is no easy task, and it requires a lot of careful planning to pull off. Not only do the characters need to have chemistry, but you also need to ensure that whatever inspired their hate isn’t unforgivable. The last thing you want is for your romance plot to feel forced.

Why the Enemies to Lovers Trope is So Popular

The enemies to lovers trope is everywhere, in novels, movies, and roleplay forums. We can’t help but love it! But… Why is this trope such a popular choice for writers, readers, and roleplayers alike? Well, it’s actually not as simple as you might think. There’s a psychological explanation for why this trope is so universally appealing.

The simplest way to explain why people love this trope so much is that it is gratifying for readers. Any time you give readers the chance to figure something out before the characters do is an opportunity to invest them in the storyline and get more attached to the characters. Readers can see that two characters could be good friends or lovers if they could set aside their differences or disagreements, even if the characters can’t stand each other in the beginning. You control how their relationship is perceived, but you can still give readers that moment of “aha! I knew they were right for each other!”

In addition to that, these kinds of stories often include redemption, character development, and overcoming biases, beliefs, and outside influence in order for the characters to achieve happiness. Everyone loves to root for the misunderstood characters, the underdogs, and the ones down on their luck. These stories are hopeful, and even if we don’t want to admit it, humans are suckers for hope.

Establish the Characters in the Story

First and foremost, you’re going to need to make sure that the enemies have the potential to get along. You need to be very strategic about how you design these characters, since this will determine whether or not the dynamic will work authentically. The characters should be unique individuals, obviously, but you need to build them in such a way that your readers will be able to identify their chemistry.

The two characters should have some similar or complementary traits. The characters could have a similar sense of humor, banter with sarcasm, or have beliefs or goals that align with each other’s. They should have traits that make up for the other’s shortcomings, and they should have struggles and flaws that the other character could help them with—if they could only get along.

However, you shouldn’t force these similarities down your readers’ throats—you want readers to pick up on the subtleties, so don’t be too obvious about it. These parallels should give readers the sense that they would get along, if not for whatever obstacle warped their opinions of each other in the beginning.

If you want more ideas for all the ways you can influence the way your characters are perceived, you can check out my other article: How to Make Characters Interesting, Complex, and Unique.

Decide the Reasons Why the Characters Hate Each Other

There are a number of different reasons that characters could have for hating each other, but you need to be careful about how you approach this as well. Some reasons work better for this dynamic than others, so here are some of the best reasons to utilize if you want your rivals to fall in love:

Basing the characters’ hatred on misunderstanding and things outside of their control, rather than on their inherent traits, gives them a better chance at forgiving each other and eventually getting along. The characters’ hatred should never be based on things that are unforgivable, and they shouldn’t be allowed to evolve as a result of abuse or trauma. You cannot reasonably expect two people to fall in love if one has murdered the other’s family, kidnapped them, or done anything along those lines. It would not result in a happy, healthy relationship, and therefore isn’t as gratifying for readers.

If your characters hate each other for the wrong reasons, then you could end up inadvertently romanticizing bullying, abuse, and manipulative relationships. I shouldn’t have to tell you—do not do this.

The biggest mistake that writers make when attempting this trope is that they move through the arc too quickly. Overcoming intense feelings for another person takes time, and it will happen in distinct phases. First, the characters need to forgive each other for whatever made them hate each other in the beginning, then they will likely be friends before they can come anywhere close to falling in love.

Here are some suggestions for helping the characters realize their true feelings for their rival.

Give the Characters Time Alone with Each Other

The first thing you should be looking for in your plot is an opportunity to force the two (soon-to-be) lovebirds together. Since, in most cases, the dynamic is based on misunderstanding, outside influence, or warped perspectives, getting the characters alone together can tip the domino that starts their new relationship.

Talking things out can be beneficial. Even if all the characters do is argue, you should use situations like this to let the characters get things off their chests and admit how the other’s behavior is wrong or hurts people. It can be a telling display that they care more than they want to admit. It can also get each character to realize what the other person is misunderstanding.

Make Characters to Work Together

Once they have has some time alone to talk things out (or argue), then the next thing you could do to help them overcome their differences is to work together. Working towards the same goal can help two characters see eye-to-eye, and it can give them an opportunity to show off their more redeeming qualities and skills. Maybe they have to work together to escape, survive, or prove someone’s innocence. Maybe they need to go on a quest together to retrieve a treasure. Whatever you choose, make sure you give each character an opportunity to prove that they aren’t as bad as the other one thinks they are.

Utilize Sexual Tension Between the Characters

Characters that are psychically attracted to each other despite how they feel emotionally can actually be a sign that they don’t hate them as much as they think they do. It’s near impossible to be sexually attracted to someone you hate, so this can clue readers in that there might be some potential for emotional attraction as well. Plus, sexual tension can be fun, and it can lead to entertaining conversations and awkward feelings.

My all-time favorite way to utilize this technique is with teasing. Teasing is inherently a little mean, but it is also inherently a little coy. Characters can still make fun of the other person’s behavior, style, or mistakes, but they do so in a way that invites flirty bantering. If you pull this off well, your readers will be begging the two characters to “just kiss already!”

However, there are other ways to use this technique as well. You could have one character make the other blush whenever they take off their shirt. You could give them dreams about each other, have them imagine them with other people, or otherwise fixate on certain aspects of them, like their biceps, hands, hair, smile, or gait.

Give the Characters some Internal Struggle

Realizing your feelings for your mortal enemy isn’t an easy thing to come to terms with. The characters should struggle with all the things the other has said, done, or experienced. It’s hard to take back nasty statements, and it can be even harder to give or accept forgiveness.

This is the point in which the characters need to do some soul-searching to figure out exactly how they feel, why they feel that way, and what they want to do about those feelings.

If the characters are going to make things work between them, they cannot simply continue the way things have always been. They must acknowledge where they were wrong, and change themselves for the better. They must confront their beliefs and change their perspective, and above all else, they need to forgive themselves and each other for the time they spent hating the other.

In many cases, characters will need to redeem themselves before their relationship will work. This is a great opportunity to write a redemption arc for one (or both) of the characters, which can make readers feel even more emotionally attached to the characters.

Writing a Confession of Love

Once the characters have overcome the obstacles in the way of their love and come to terms with how they feel, the next step is for them to admit those feelings to each other.

How your character decides to approach this decision is going to depend on their personality and their existing relationship with the other person. One type of character may approach it awkwardly, while a different type of character could choose to be more subtle about it. However you choose to have them bring it up, make sure the scene carries some emotional weight to it. You want readers to feel like the stakes are high.

It’s worth noting that the characters aren’t likely to confess their love without feeling some shred of reciprocity. If they haven’t noticed any indication that the other person likes them back, such as flirting, teasing, or staring, then they’re probably going to sit on those feelings for a while. Both of the characters can even be doing this at the same time, without realizing that the other person feels the same way.

For some more general tips for writing about romances, you can look to my other article: Romance 101: How to Write Characters Falling in Love.

Give the Characters Their Happily Ever After

In the end, the relationship should make both characters better people. They would have both become more sympathetic to the ways their actions influence others, and in many cases, they would have had to overcome bigotry, biases, and societal restraints in order to end up happy in the end. The whole point of the trope is to have two characters that would be happier, healthier, and overall just better together—if they could only set aside their differences. Without that necessary development, your readers won’t have much to root for.

And finally, although I mentioned it above, I’ll say it again: don’t use this trope to romanticize bullying, abuse, or manipulation. Not only does that defeat the purpose of the trope, but it is also obviously harmful to impressionable readers.