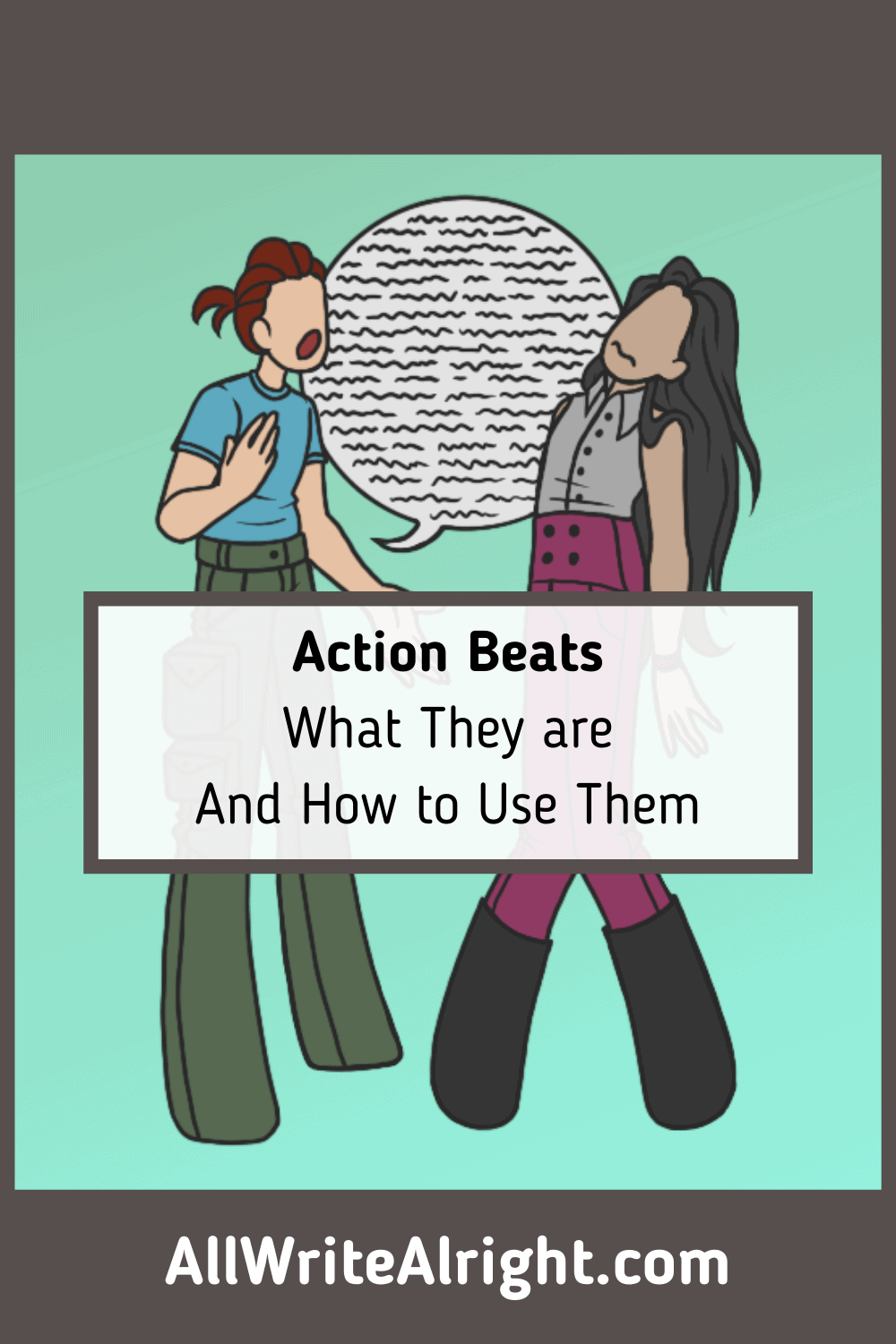 If you’ve moved on to editing the first draft of your story, you may have noticed the word “said” comes up a lot. Using the word “said” is the quickest and easiest way to indicate which character is speaking in a story, so many first drafts are simply riddled with it. Though “said” is useful, it can become distracting if it is used too frequently.

Moreover, the use of the word “said” is hotly debated in the writing community. Some writers advocate for never using the word at all, while others argue that it’s better to use “said” than some of its alternatives.

What if there was a better way? Well… allow me to introduce you to my all-time favorite writing technique: action beats.

What is an Action Beat?

Action beats (also called dialogue beats, action tags, or beats) are sentences that identify a speaker without using dialogue tags like “he said.” They often interrupt a character’s dialogue in the middle, but, just like dialogue tags, they can also come before or after a character has said something.

Here are some examples of what action beats look like in action (the beats are the bolded sections):

Josh adjusted his glasses. “I’ve never seen anything like this before!”

“Hm… I don’t know what to do with this information.” Marie fidgeted with the front of her shirt. “Maybe we should talk to a professional.”

“This is bad news.” I let out a low hum, slowly swaying back and forth.

Why are Action Beats Important?

Action beats accomplish quite a bit in a fairly short amount of space. Aside from their primary purpose of identifying who is speaking, action beats can help your narrative in other ways.

The way you describe a character’s body language can have huge impacts on the tone of the scene. Take a look at Writing Body Language: Bringing Your Characters to Life to get some advice on how to utilize that.

Similarly, action beats can help to establish the character’s tone of voice. Compare these two examples:

The action beat in the second example helps establish that the speaker is being sarcastic, without you having to write “she said sarcastically.” Here’s another example:

Here, because of the action beat in the second example, you can tell that Mac is angry. Using action beats instead of dialogue tags and adverbs can make your story flow more naturally, and readers will feel more involved in the story as it is taking place.

Action beats can also be used to break up large blocks of dialogue. When a character is monologuing, it can be exhausting to read a long series of paragraphs about what the character is saying. By interrupting the dialogue with little actions or descriptions, you can keep readers grounded in the scene by giving them things to imagine while the character drones on.

Finally, using action beats instead of action tags means you can avoid the repetition of always using the word “said” (or the countless alternatives that are arguably much worse). Instead of every line ending in “he said” or “she said,” you can liven the dialogue up with much more interesting language and imagery.

Action beats are one important way that you can utilize “showing” in your writing. If you want to learn more techniques like this, check out Show, Don’t Tell: What It Is and How to Use It.

How to Punctuate Action Beats

Thankfully, you don’t need to learn some funky new way of formatting dialogue in order to include action beats in your story. Action beats are just like normal sentences, so, unlike dialogue tags, there are no odd grammar rules that apply to them.

To make this clearer, let’s look at another example.

Keep an eye on the punctuation and capitalization. In the first example, the first bit of dialogue ends with a comma, and the following tag is not capitalized. This is standard for formatting dialogue.

In the second example, the action beat is treated as an independent sentence, which means the first bit of dialogue has to close with a period instead. Since the beat is a full sentence, the beginning of it is capitalized.

Formatting dialogue and using proper punctuation can be a challenge, but not knowing all the rules by heart does not mean you’re a bad writer. I recommend using an automatic grammar checker like Grammarly to avoid simple mistakes.

When to Use Action Beats

Action beats are an awesome tool at your disposal, and they can do a lot to elevate ordinary scenes. However, as with any technique, you should be careful not to overuse it. If the dialogue jumps between several different characters or the conversation is particularly long, then it might just be better to use dialogue tags like “said” or “shouted” instead.

Additionally, if what the characters are saying is important for the plot, or you want readers to pay extra attention to what is being said, it would be better not to distract them with action beats.

Use your best judgment when deciding between dialogue tags and action beats. Remember, you can always rewrite something if you don’t like how it flows.