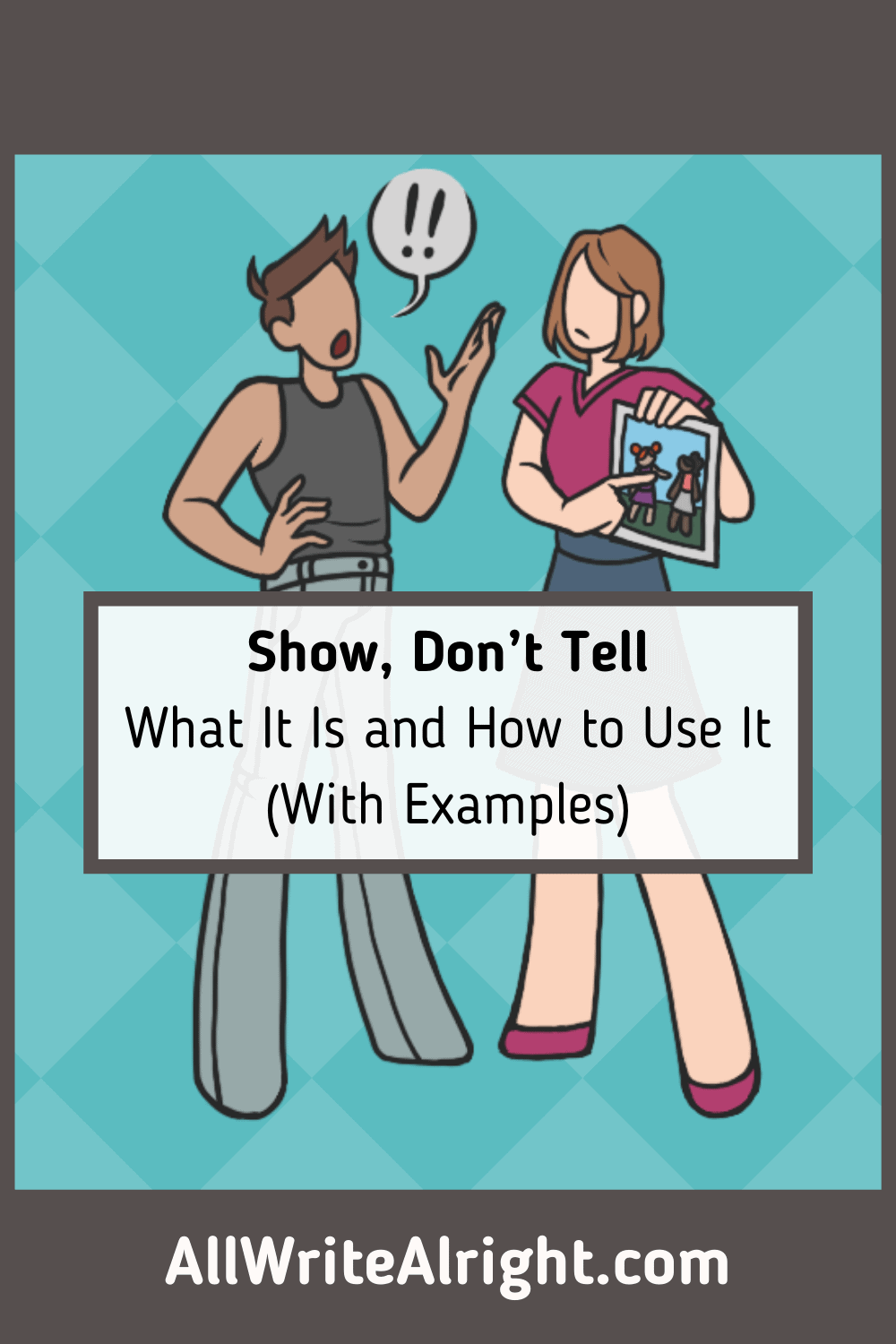 If you’ve read a few of the other articles on this site, then you’ve probably seen me state “show, don’t tell” more than once. If that’s the first time you’ve heard that phrase, then you probably aren’t completely sure what it entails or how you’re supposed to apply that to your own writing. Without good examples, it’s hard to be sure what it really means. And, even if you’re familiar with the concept in theory, it can still be frustrating to figure out how to implement it.

“Show, don’t tell” is often uttered by teachers and editors alike, but what exactly does it mean? Basically, “showing” and “telling” are two different writing techniques.

Telling is the act of describing an action, setting, object, person, or other element in the story objectively. There is no room for the readers to make inferences about what is going on, and every piece of information feels like it is being spoon-fed to them. To borrow an example from a previous article (A Guide to Self-Editing Your Writing), this would look like “the house felt creepy.” Instead of describing the different elements of the house that make it feel creepy, you can just state that it’s creepy and let readers fill in the gaps with their imagination.

Showing is the act of appealing to readers’ senses to give them specific impressions about an action, setting, object, person, or other element in the story—without them having to be told. That means, instead of describing something objectively, you focus on the details that would give readers the impression you want them to have. To go back to the house example, try to think about the types of things that would make a house creepy. Maybe the house is dusty, run-down, or just old. Maybe the lights flicker. Maybe the characters inside hear strange noises, or there are stains on the walls and floor. What aspects of the house can you highlight to make readers feel that the house is creepy, instead of telling them outright?

Why is “Show, Don’t Tell” Important?

“Show, don’t tell” is a phrase that is said so often in writing classes, workshops, and while editing that it’s understandable that many writers are absolutely sick of hearing it. However, as frustrating as that is, it’s with good reason—it’s good advice.

Showing is incredibly important in writing impactful stories. If you want readers to empathize with characters’ emotions and immerse themselves in your scenes, then you need to appeal to their senses.

Simply “telling” readers everything they need to know is dull, and it can be difficult to give a scene any emotional weight when everything is stated objectively.

Is “Showing” Always Better than “Telling?”

With that said, it’s important to state that showing is not always better than telling. There are many situations in which you don’t need to waste time and effort “showing” situations in your stories. In fact, it can actually be harmful to your story if you try to show absolutely everything.

The entire purpose of “showing” is to emphasize emotions and draw readers in to the narrative. If you are describing a transition between scenes, or writing something for expository or informational purposes, then there is absolutely no reason to “show, don’t tell.”

Sometimes, being brief and concise is more important than focusing on the details. It all depends on the context.

When to Show, Not Tell

When it comes to writing a story, there are a few situations in which it is particularly important to “show, don’t tell.”

In general, any time you are describing an action, item, character, or setting that is important to the plot or larger narrative, you should try to “show” as much as possible.

However, more specifically, you should use showing when describing:

By utilizing this technique effectively, you’ll not only create more vibrant stories, but you’ll also be able to better control the pacing of your narrative and effectively establish a specific tone for any kind of scene.

How to Show, Not Tell in Your Stories

Learning how to apply this technique is easier said than done, so here’s a brief breakdown of the way you can think about “showing” before we move on to some more concrete examples.

Any time you are describing a character’s emotions, you should avoid naming the emotion itself. Instead of simply telling readers “she looked angry,” describe how her expression and body language change to reflect her emotional state. If you’re writing in the first person, you can focus more on the physiological changes that come with different emotions, such as a rush of adrenaline, feeling warm, or getting nauseous.

If you need some tips for how to use facial expressions to show emotion, check out my other article “How to Describe Facial Expressions in Writing.”

Additionally, any time you feel tempted to describe anything with an adjective (fancy, creepy, bright, colorful, noisy, etc), you can use “showing” instead. Rather than say that a place is loud, describe what the different sounds are, and show other characters covering their ears or trying to move away from the noise.

If something looks fancy, then describe the elements of it that give it that impression. If it’s a fancy book, describe how the cover contains an elaborate pattern stamped into the leather with gold leaf, how the edge of each page is lined in gold, or how it has an intricate buckle to fasten it shut.

When trying to “show, not tell,” simply think of how you imagine something, and how you can describe it in a way that will help readers imagine the same thing. When you picture a cute dog, what elements of the dog makes it cute instead of ugly? When you think of a gross puddle on the ground, what makes it gross? When you think of an annoying person, what do they do that’s annoying? If you focus on the details, it’ll be much easier for you to “show, not tell.”

Here are some examples of “telling” and “showing,” to give you a better idea of how to use “show, don’t tell” in your own writing.

I hope you find those examples useful!

Now go out there are create something great!