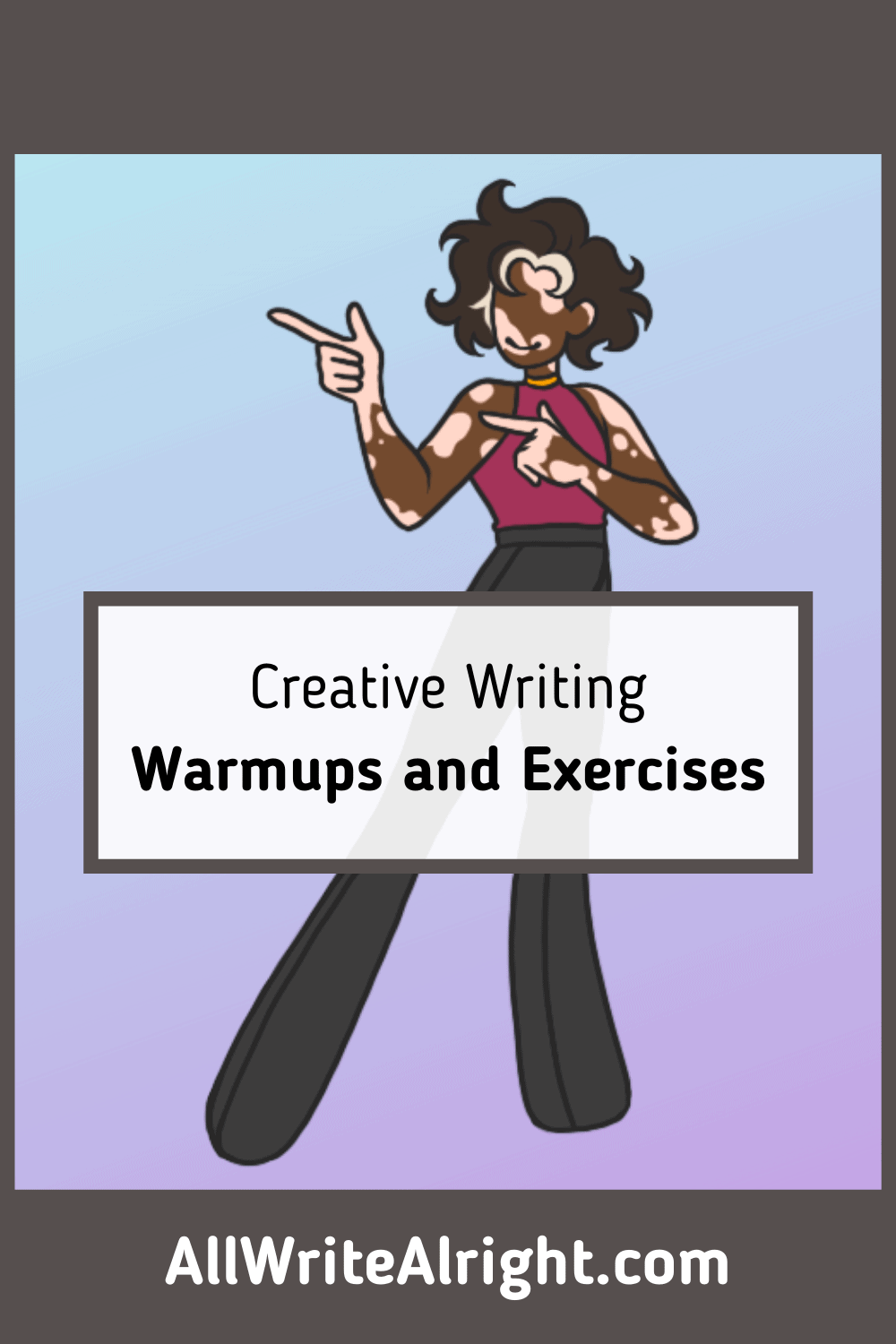 As with any skill, writing requires practice if you want to get any better at it. However, unique ideas can be hard to come up with on your own. If you want to warm up and get some ideas flowing, or you need some prompts for practicing a new technique, check out some of the ideas below!

A lot of these prompts work best if you have an existing character (or several) to use, but you can also make up a character on the spot if you’d rather do that.

Write a short story. It can be about anything, and don’t worry about making sure it’s perfectly edited—it’s a first draft, after all. Write the whole story in one sitting, then set it aside and don’t look at it again. (If you can’t write it all in one sitting, try starting over with a shorter story!)

Immediately after you finish writing your short story, start over. Don’t look at your first draft at all, and rely only on your memory to rewrite the story from scratch. Once you’re done, set the story aside and come back tomorrow.

The next day, rewrite the story again without reading or looking at your first two drafts. If you can’t remember everything, try to fill in the gaps with new ideas that will draw the plot towards the same conclusion.

Once you’re done, compare the three stories. How similar are they? What aspects are different? Rewrite the story one last time, using all three drafts as a reference. Take your favorite parts of each draft—whether that’s dialogue, phrases, descriptions, ideas, etc—and combine them into one.

Write a scene in the first person where a character is confronted by their loved ones about something. What is the reason for the confrontation, and how do the other characters present the issue?

Focus on the emotions of the scene. Is your main character defensive about the problem, or ashamed? Or something else? Remember that emotions can be confusing and multi-faceted, and try to convey that complexity based on the character, the situation, and the other details.

The scene can be as short or as long as you want to be, but if you feel like continuing the story with extra scenes, do so! Explore the character’s emotional journey to acceptance or denial to bring the story to a logical conclusion.

Write an emotionally charged scene, like a big argument or a character getting bad news. Describe the scene with absolutely no dialogue. Do not write any thoughts, spoken words, or written notes like diary entries or anything like that. Do not include dialogue in flashbacks.

Narrate the story with as much emotion and descriptive language as you can to bring the story to life without writing a single line of dialogue from either character. Try to convey the meaning behind this scene using only the emotion, the setting, and the details you include.

You can of course imply that the characters are speaking, but do not write what they are saying. Leave some things for the readers to imagine, and illustrate the scene like it’s a silent film.

Write a short scene in first-person or closed third-person where your main character is attacked by another character. An easy option for this is to write about someone mugging them with a weapon, like a knife or gun, but I won’t limit the possibilities. Work through the main character’s reaction to the situation, and how they come to a decision about what to do, whether that’s fight back, run away, give in to the attacker’s demands, or something else.

Then, rewrite the entire scene, but this time from the perspective of the attacker. What’s going through their mind as they carry out their plan? Does the story still start from the same point in time, or does it have to go farther back in time for more context? What is their reason for doing this? Are they a sympathetic character, or are they just despicable? Work through their emotions and motivations, then their reaction to whatever the victim does. Are they able to walk away with what they want in the end?

Rewrite the story again, now from an omniscient perspective. Layer the first two scenes together to show how each character struggles individually with the situation at the same time. There was a witness to the scene, but they never come forward, and otherwise would have been absent from the story from the closed perspective of the first two characters. How does this additional character and enhanced perspective provide more context and interest to the scene? Is it too much context?

After you’ve written all three stories, consider which of the three perspectives best communicates the story’s intent. Which was the easiest to write? Which one makes the most interesting story? If you were making a second draft, which option would you move forward with, and why?

Your character hasn’t been sleeping well. As they lay in bed, staring up into the darkness of their room, what are they thinking about? What are the thoughts that are keeping them awake? Has this always been a problem for them, or is this insomnia the result of something that happened to them recently?

The world feels different at 3 am. Explore the character’s unique state of mind at this moment, and follow their stream of consciousness wherever it takes you. Let their mind wander uninterrupted, and write out each thought as it leads to the next. You might learn some things about them that you hadn’t considered before.

If you need a little help with this, check out Losing Sleep Over How to Write a Character with Insomnia?

Write a story with an unreliable narrator.

However you choose to make your narrator unreliable, you need to find a way of making readers question the narrator’s credibility. Does the narrator’s unreliability become more obvious over time, or was it always obvious that they are not to be trusted? Is there a plot twist at the end that reveals that they’re unreliable?

An unreliable narrator can vastly alter the tone of a story. Consider what you’ve written. How would this story be different with an objective or omniscient perspective? How can this technique be useful in adding depth to a story?

A character’s mood can change how they perceive a setting, and the way a setting is described can have a large impact on the overall tone of a scene.

Think of a particular environment, such as a countryside in the rain, a cityscape late at night, or a breezy beach at sunrise. Once you’ve decided on the environment, write a really brief, objective description of it, as if you are setting the scene for a script. These are just notes to keep the setting consistent.

Describe this setting from the first-person perspective of a pessimistic character who has had a really rough day. They’re in a bad mood, and maybe they just dislike this type of weather or location in particular. How would they perceive their environment? What words do they use to describe what they see around them? What do they think about where they are? How does their environment impact the way they feel?

Now, write a new description for the exact same setting, but from the first-person perspective of a character who is feeling at peace and happy. Maybe this is their favorite weather or place. Maybe they’ve just received really good news. Regardless, this character is feeling good about life and where they are right now. How does their description differ from the pessimistic character’s description?

Compare these two descriptions of the same location at the same point in time. How do they influence the tone of the scene? How can the way a setting is described add more depth to a character’s emotions? Based on how this scene is described in each of these descriptions, what can you expect to happen here?

Think about a time you did something stupid as a child. How old were you? What were you doing? What did you think about what you were doing?

Take this memory, and write about it in first-person and present tense. Try to make your protagonist think and act like a young child, or however old you were at the time of this incident. Use your experience and the way you remember the situation to help you write an internal monologue for this child protagonist.

If you can’t remember everything that happened, then just fill in the gaps with anything that fits the narrative. If you want to, you can even write a different ending from the one that actually happened in your past.

If you find yourself struggling, try checking out A Guide to Writing Child Characters Authentically.

Take an old story you’ve written and rewrite it to be a different genre.

Stories often have core meanings (like “nothing can stop true love” or “friendship always prevails”) or simple fundamental plots (like “save the girl” or “dispose of a cursed object”). Interesting things can happen if you find a new and creative way of sending the same message within an unexpected context.

Try to find the overarching themes of your story. Does a character overcome a major internal struggle? Do the characters go on a road trip? Do the characters have to embark on a grand quest to retrieve a priceless artifact? Then, consider how you can keep these themes intact as you manipulate the other elements of the story to fit into the conventions of a new genre.

If you’ve never written fanfiction before, you’re missing out on a great opportunity to learn from your fellow storytellers!

Take a show, movie, book, game, or any other piece of media that you enjoy, and try to come up with a story that you could tell with the characters within the confines of their world. This will require analyzing each character you use to fully understand the nuances of their personality, behavior, and manner of speech. It will also require a deep understanding of the setting in which their original story takes place, so you can keep your story authentic to the canon.

Fanfiction is a great way of analyzing another story’s worldbuilding and characters. You can create a new conflict for the characters to deal with, explain a loose end that was never tied up in canon, or delve into lore that is never completely explained. You can even explore a possible dynamic between characters who have never met in canon, or rewrite a new ending for the story.

There are many possibilities when it comes to writing fanfiction, but no matter how you choose to write it, you’re going to end up learning something. Fanfiction is fun, but it also requires a lot of analysis, and you can end up learning a lot from other creators this way.

Take a look around you right now.

Exercises like this can make you better at capturing the essence of an environment, as well as make your scenes feel more realistic overall. It’ll help you add little touches of personality to characters’ rooms, ground readers in a setting, and make the world around your characters feel all the more immersive.

I hope you find these exercises useful!