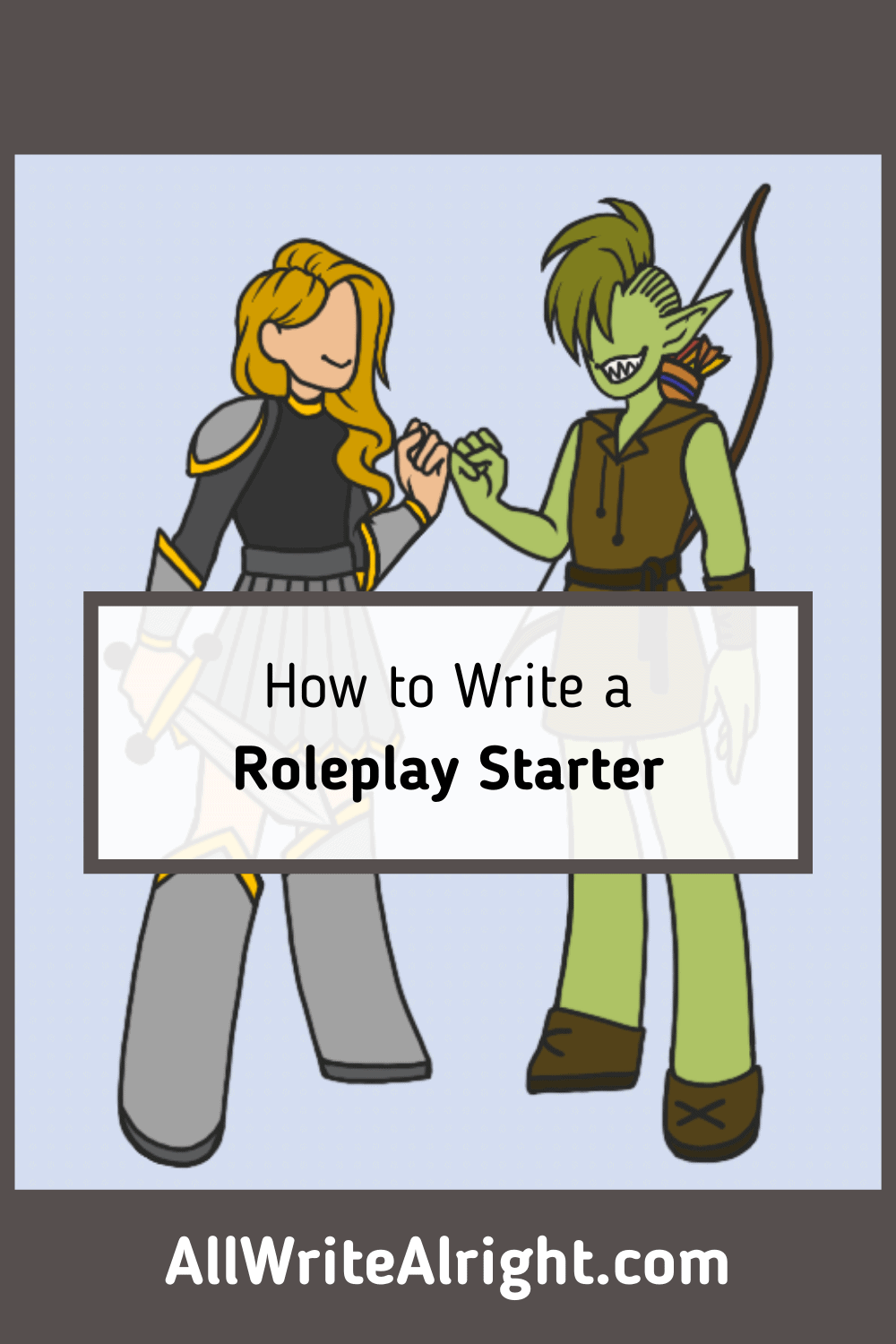 So, you’ve been hitting it off with a new potential roleplay partner, when one of you drops the dreaded question: “who is going to write the starter?”

Writing a roleplay starter is not unlike writing the first page of a story. It needs to be interesting, concise, and cover a lot of introductory material in a short amount of time. There’s a lot riding on that first message in a roleplay too, since you know the other person is going to judge your writing style, your characters, and your storytelling ability. So… it’s not surprising that many people shy away from the responsibility.

However, writing the starter is a privilege. When you get to start the entire story, you get to be in charge of the setting, the situation, and the fated meeting between the characters. And honestly, it’s not as difficult as people make it out to seem. Once you understand the formula, you’ll want to take charge and write the starters for every roleplay you’re a part of.

The Basics of a Roleplay Starter

A “starter” is the first message in a roleplay thread; it is the start of the story. When you write a lazy starter, there’s not a lot of incentive for the other person to respond. No one wants to do all the work in a roleplay, so you need to make sure you are providing a starter that they will be excited to respond to and build off of.

In order for a starter to be effective, it needs to do three basic things:

I’ll break down each point in more detail in the sections below.

The very first thing your starter should do is establish the setting in which the characters are going to encounter each other. Do they meet in a bar? Are they on the same plane? Are they both wandering through the same cursed forest? No matter what you choose, you need to make sure you are describing the scene well so the other player knows how to navigate it with their own character.

In many cases, the initial setting is discussed before the actual start of the roleplay. However, even if you know in advance that the characters will be meeting in a coffee shop, you still get to name the coffee shop, describe the atmosphere, and establish the basic layout of the building. Don’t get too hung up on the details, however. You aren’t writing a novel after all, and you don’t want your starter to end up being several thousand words.

There is a notable exception to this rule. If you are writing a fandom roleplay, and the characters will be meeting in a location that appears in the original story (the “canon”), then you simply have to state the location and where your character is within it.

The next most important thing that a starter must do is introduce the character (or characters) you intend to play.

In almost all cases, roleplayers exchange character bios before the start of the roleplay. This is an important step that allows you and your roleplay partner to determine the potential chemistry between the characters. The last thing you want is to realize the characters don’t have a good dynamic after the story gets rolling.

If you aren’t sure what should be included in a character bio, I have another article on the topic that may help you out: How to Write a Character Bio (With Examples!).

You should still include a brief character bio even if you intend to play a canon character from a fandom. Use their bio as a way of introducing quirks and behaviors that you think apply to the character, and share any headcanons that you may have for them. If the character deviates at all from how they are depicted in the source material, then you need to point that out as well.

Since the other player already knows your character’s basic information from their bio, you don’t need to give a complete physical description of them when you introduce them in the starter. You can mention a few of their physical traits, but for the most part, your introduction should focus on how the character behaves.

To go back to the coffee shop example: Is your character sitting quietly by themself with a bagel and a coffee? Are they engaged in a debate with other coffee shop goers? Are they arguing with the cashier about their credit card being declined? Use their introduction as an opportunity to show how the traits you described in their character bio manifest in their behavior. By focusing on what your character is doing instead of what they look like, you are also giving your roleplay partner an opportunity to respond to the situation.

Create an Opportunity for the Other Player to Respond

It is important to keep in mind that the starter you are writing is meant to be open-ended. You want to encourage your roleplay partner to engage with what is going on in the scene. As I mentioned above, having your character doing something is a great start. If your character is making a scene as opposed to just sitting around quietly, then that increases the chances of someone realistically interacting with them.

Some people are okay with you bringing their character into the scene yourself, by having them enter right on cue, come from the right direction, or just be around for your character to trip and run into. If you’re comfortable with doing so, you can take temporary control of the other player’s character just long enough to place them in the scene. This lets the other player know exactly how their character is involved, so they know how to react more instinctively. It is important to remember, however, that not everyone is okay with this. You need to ask for permission before you do anything like this with the other player’s character. Never make assumptions about what your roleplay partner does and does not allow.

This rule sort of applies all the time. Roleplays are dependent on interactions, so every reply should contain some action, detail, dialogue, or information that provides the other person with something to respond to. If you don’t provide these opportunities, it will be harder for your partner to build on the story, and the roleplay will lose momentum.

Those three points listed above are the most important aspects of a starter, but there are a few other things you can keep in mind to make your roleplay starters the best they can be. Here are some general tips for writing a good roleplay starter:

Some Parting Thoughts About Roleplay Starters

Once you have a starter drafted out, take a moment to consider how you would feel about receiving a starter like that. Did you create a vivid description of the scene? Does your introduction do your character justice? How would you respond? What options do you have to react to it? If you can’t anticipate how someone would react in that situation, then you need to rewrite it so your roleplay partner knows what their character should do.

If you still aren’t confident you can write a good starter, you can always learn from others. When someone sends you a starter, analyze it. Determine the elements that you like about it and the elements that are difficult to navigate, then learn from that. The more starters you read, the better you’ll get at identifying what works and what doesn’t work. Then, when it comes time to write a starter yourself, you’ll know what to include.

Good luck, and have fun roleplayers!