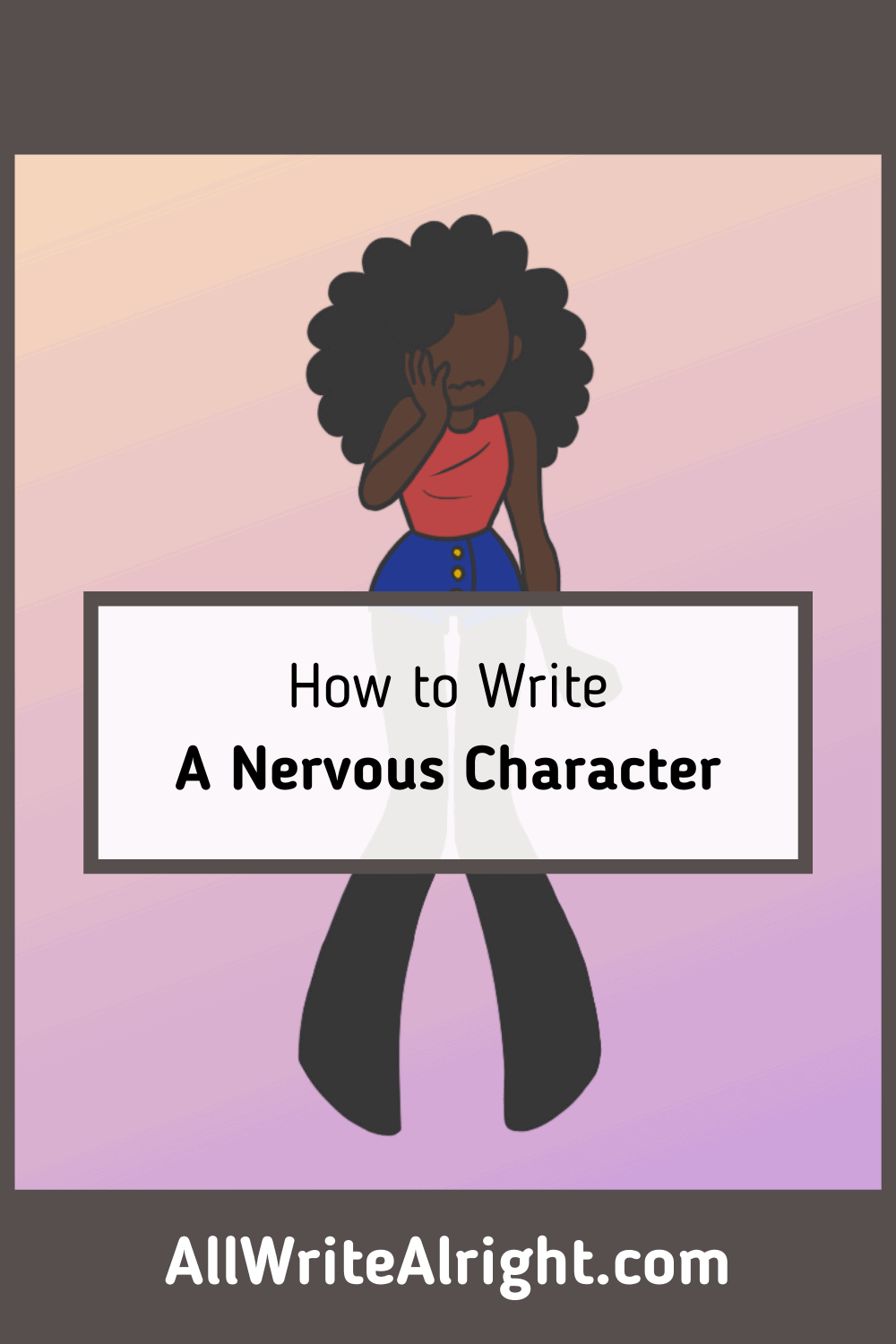 This is it—the big moment! Your characters are about to meet the enemy that has been ruining their lives, they just have to walk down a long, imposing hallway to get to his office. The scene is meticulously crafted and eerie, and you’ve thought out exactly how you want to build the suspense as your characters move down the hall to approach the office. There are a million things that could go wrong: the enemy could be expecting them, or he may not be inside at all. They could get caught before they even reach the door!

And yet, even with all that suspense, your characters just don’t seem nervous enough. They simply move down the hallway, possibly thinking casually about how creepy it is. Despite everything, you can’t create a cohesive display of nervousness. You can’t quite convey how they should feel, and you risk taking your readers out of the story if they can’t relate to the main characters. So what do you do?

Well, first of all, you’re not alone. Like all emotions, nervousness is a difficult thing to portray. Sure, you could narrate their state of mind, but if their thoughts and motions don’t match that emotion, then your readers won’t be convinced. There are many things that go into writing about nerves, from body language and dialogue to the body’s biological response to anxiety. But once you understand those elements, it’s easier to write than you might expect.

Nervousness doesn’t just manifest as a result of a bad memory or fear, though. Someone can get nervous around a a person they like, and their nervousness could manifest in a different way. If that’s more like the kind of nervousness you want to convey, however, I recommend taking a look at my other article Romance 101: How to Write Characters Falling in Love.

Now, if you hadn’t guessed from the intro, I’m a huge fan of not telling your readers what to think. You can’t be so direct as to simply state “he was nervous,” or stick in the adverb “nervously” at the end of anything your character does. It’s stale, and it’s not fun to read. Every sentence you write should be an opportunity to dazzle your readers and keep them immersed in the story.

When showing how your character feels, try to think outside the box. Every character is different, so use their nervousness as a way to give more insight into their personality. Fear has a way of revealing a person’s true colors anyway, so find a way to tailor their reactions in a way that tells the reader more about them. For example, a character that is otherwise sweet might get sarcastic or rude when they start to get tense, or a character that has been sober for years might have a drink to calm their nerves. If a character stops speaking, or suddenly develops a stutter, then the audience is going to assume that they’re nervous without you having to narrate it.

To further illustrate that, make sure you show exactly what the character is nervous about. That might sound obvious, but if their nervousness is a result of a bad memory associated with a place or person, you might have to emphasize that to make it clear to your readers. Make a point to describe the source of their anxiety, whether that’s a location, a person, an animal, or something else. You could even hyper-fixate on the details, especially the details related to the reason they make the character nervous.

For example, your character may have been bitten by a dog when they were younger. When they encounter a dog, be sure to describe in detail how the dog’s large and sharp teeth are visible as its mouth hangs open, panting from running around chasing squirrels. Even if you haven’t revealed to the audience why the character is nervous around dogs, that information will provide all they need to know.

If you need a little more direction for showing nervousness in your writing, take a look my article on the topic: Show, Don’t Tell: What it is and How to Write it.

How to Write Nervous Body Language

When a person is nervous, they subconsciously shift around and fidget in ways that they ordinarily wouldn’t. To better show your character’s nervousness, you need to cue the readers in by drawing attention to the character’s nervous body language. This can take many forms depending on the character and the situation, but here are a few examples to get you started.

There’s a multitude of different ways that nervousness could manifest in the character’s subconscious behavior. Each character would respond differently, and the same character might react differently depending on the situation. Confessing to a crush is going to result in different nonverbal cues than hiding in the woods from a killer would, after all. Both situations could make a character nervous, but not in exactly the same way. Keep the context of the situation in mind when picking body language for your nervous character.

When a person is faced with a worrying situation—like the threat of capture, a sound in the dark, or an encounter with an erratic individual—then they get nervous. This situation triggers an adrenaline response, also referred to as “fight-or-flight.” A flush of hormones increases the body’s heart rate and prepares the individual to fight off or flee from the potential danger. This reaction has several physical cues that you can draw from to help show your readers that your character is feeling nervous.

This reaction can also be triggered by an unwelcome surprise. For more information, check out my article: Boo! Writing Surprised Characters.

After the “fight-or-flight” response is triggered, a character may experience:

It is easy to rely too heavily on these cues as a writer since many of these symptoms have become almost cliché. How many stories have you read where the character’s heart started pounding? Probably a lot. You can get around this by getting a little more clever with how you present the information, such as likening the beating of a heart to the beating of a drum or something hammering on the inside of the character’s skull. Show the readers what the character feels, instead of simply presenting objective information.

Of course, when a character is feeling nervous, then their speech patterns might differ from when they are feeling calm. Some people talk faster and speak more, while others might stutter or struggle to get a sentence out. Some people even stop talking altogether, and opt to draw as little attention to themself as possible.

When writing dialogue for a nervous character, you have a couple of options. One of the best options is to give your character a stutter. Now, I know what you’re thinking, b-but a st-stutter isn’t just- just tripping up on saying c-certain words. In actuality, a stutter can manifest in many different ways. That is definitely a legitimate way to write a stutter, but if you want your character’s nervous dialogue to be a little more unique, you could explore a few of the other ways a stutter can manifest.

A stutter can cause a character to:

Obviously, some of these examples are a little extreme with the way I presented them, but I wanted the point to be really clear. When using any of these in your story, try not to go so overboard, or it will become exhausting to read. To see if the dialogue works well with how you’ve written it, try reading it out loud to see if it flows the way you want it to, and conveys the right amount of nervousness. And of course, feel free to combine multiple options when crafting your character’s dialogue.

Keep in mind that a person who stutters when they’re nervous might not stutter all the time. If they are nervous around other people, then they probably won’t stutter when talking to themself or to close friends. This is also true if they are reading a practiced script, or singing a song. Maybe the character never stutters, but when they encounter a particularly frightening situation, they stumble over their words.

If your character stutters all the time, and it just gets more pronounced when they’re nervous, then they’re probably going to be hyper-aware of the fact that they’re struggling with their words. Living with a stutter can make a person self-conscious, so when it gets more pronounced, they might curse in frustration, repeat a sentence until they can get it right, or just stop talking altogether.

If your character is nervous about a lot of things, or tends to be nervous all the time, then you might want to research some anxiety disorders to see if you could model their behavior after a specific psychological condition. This doesn’t mean your character would need to change much at all, but having a condition to reference, like panic disorder or PTSD, could give you additional inspiration for building or developing your character. It is, of course, entirely optional, and it is a lot of extra work, but it could give your character a little more dimension and make them even more realistic.