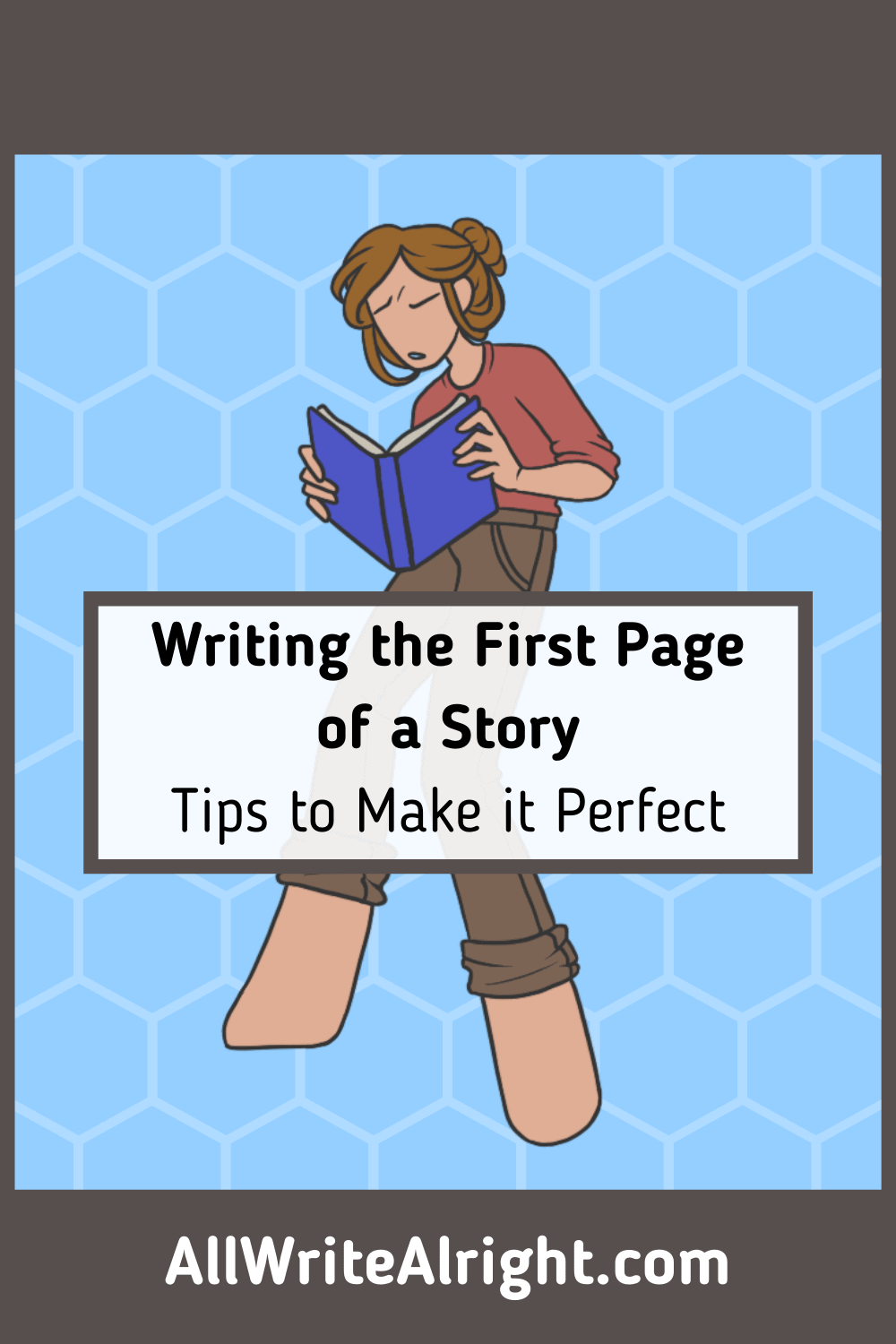 Anyone who has ever started writing a story knows that the beginning is the hardest part. Whether it’s the first page, first paragraph, or even just the first line, starting a new story is tough. That is the page that convinces someone to read the rest of the story, so it’s important to get it right. Depending on your goals, you might even plan on sending your story to a publisher, and if you don’t have a strong opening, they won’t hesitate to toss it in the trash—even if the story as a whole is good.

With that said, the average length of a page is usually between 300 and 500 words, depending on how it is formatted. That’s not a lot of space to make a good first impression, and you need to fit a lot of information into those few words. Thankfully, there are a few different techniques that you can learn to make your first page (and the first pages of all your future stories) much more impactful.

Contents hide
1 What Makes a First Page Good?
2 Tips for Writing the Perfect First Page
2.1 Use Proper Grammar, Spelling, and Punctuation
2.2 Don’t Make a Prologue
2.3 Don’t Start with A Mundane Situation
2.4 Create Some Mystery
2.5 Create Some Action
2.6 Highlight a Fundamental Aspect of the Main Character
3 Some Final Suggestions

What Makes a First Page Good?

The first page of a story is undeniably the most important. That is the page that determines whether or not someone will take your story home or read until the end. There are several things that readers expect from a first page, and if they aren’t excited by the time they reach the end of the page, they’ll likely set the story aside.

A good first page should:

Remember; readers owe you nothing. You could tell them how great the story is on the cover, but they won’t take your word for it. When considering a new book, most people open it up and skim the first page before making a decision, and if it doesn’t interest them, they’ll just set it aside and look for something with a better first page. You need to hook them in, and bribe them with a good enough reason to turn the page.

Grabbing a reader’s attention and creating interest is definitely easier said than done, but there are some simple methods to improve the way you approach writing the first page of your story.

Use Proper Grammar, Spelling, and Punctuation

Grammar, spelling, and punctuation contribute to your work’s overall clarity, which is incredibly important for the first page. Simple mistakes can often lead to misunderstandings, but perfect control over grammar and syntax gives readers confidence in your abilities as a storyteller. Readers are more willing to stick around and read your story if you write confidently and without mistakes. Likewise, an editor or publisher is more likely to give your story a chance if you don’t make careless mistakes on the first page.

If you don’t have all the grammar and punctuation rules memorized, or you aren’t a very strong speller, then don’t fret. There are robust grammar checkers that can help you edit your story as you go, such as Grammarly (the one that I use). Grammarly has a lot of functionality for being a free program, so it’s generally what I recommend for everyone regardless of their skill level.

Prologues are a common technique that people use to start stories, especially fantasy stories with many worldbuilding elements or a lot of history. They are often used as a way of getting readers up to speed on the context of the story or the backstory of a character before any real storytelling begins. Although it is tempting, you really shouldn’t start any story with a prologue.

This mostly only applies if you want to get your story traditionally published. Publishers despise prologues, and with good reason—it’s really difficult to write a prologue well, so most end up terrible. However, if you don’t care about getting your story professionally published, and you believe a prologue is the best way to start your own story, then go for it. Writers break writing rules all the time and still end up with excellent stories (though it helps to understand the rules and why they exist before you decide to break them).

Prologues are ultimately the easy way out. They’re boring, easy to write, and they completely remove opportunities to selectively reveal information over time. It leaves nothing for the readers to discover about the world and the story. It’s a lazy way of writing. Worst of all, prologues are the opposite of the idea of “show, don’t tell.” Prologues tell your readers what to think, instead of letting them discover things for themselves.

Don’t Start with A Mundane Situation

I mentioned this in another one of my posts, When and How to Write a Character Waking Up, but the idea is worth bringing up again. In that post, I discuss the challenges of writing a scene in which a character wakes up, because, like with prologues, it can come across as a lazy way of starting new scenes (or an entire story, in this case). Not only that, but there’s also nothing extraordinary about a character waking up comfortably in their own home. If your story starts like any other day, and the character simply goes about their mundane activities, you’re going to lose readers fast.

You need your first page to excite readers. Reading a character waking up at home, going to work, or riding the subway is just not going to cut it. However, if your character is waking up in an unfamiliar place, that’s going to have a better chance of getting readers to turn the page. They’ll want to know what happened, where the character is, how they got there, and before you know it, they’re drawn into the story. The same is true for the other examples too. If the character is being followed on their way to work, or if they witness something weird on the subway, readers might just stick around to find out what’s going on.

When you’re writing the first page of your story, you want to make sure you are creating more questions than you are answering. You want to let your readers wonder, to entice them to read more to find answers. That doesn’t mean every story needs to be noir fiction that turns your readers into detectives, but you should definitely not explain everything that is happening.

For example, you could introduce two characters that act like hostile opposites, but clearly care a lot for each other. That could make readers wonder why they stick together. Your story could include talking animals that aren’t immediately explained, you could state that the president has been missing for months, or you could just jump into a scene and give the context for it later. Make readers want to find the answers to their questions—just don’t wait too long to ground them in the story.

The goal is to make readers wonder what is going on, but not make it so confusing that they give up on reading it.

Jumping straight into the action is a great way to start the first page of a story. It’s exciting, it draws readers in, and it can create its own mystery at the same time. If the characters are running away from something, in a battle, arguing, lost, or in some other kind of conflict, readers are naturally going to be curious about the context of the situation.

However, “action” doesn’t have to involve swordfights or frightening monsters, so don’t think this doesn’t apply to your genre. You could jump into the story while a character is on an uncomfortable first date or clearing things out of their attic. Starting your story with some action just means the characters are doing something interesting. You can skip the introductions and just jump right into the story. Worry about describing the characters in-depth later on in the story.

Highlight a Fundamental Aspect of the Main Character

Remember, however, that readers expect the first page of the story to introduce the main character to some extent. You need to be careful with how you approach this, because you absolutely do not want a character description to fill up your entire first page, but you want to give readers a good first impression of the character.

You don’t need to show readers everything about the character from the get-go. It’s more fun to learn about them over time anyway. Instead, you should introduce them in a way that highlights a core aspect of who they are. For example, maybe the first time readers meet a character, he’s rigging an explosive. That certainly leaves readers with a strong first impression of what kind of person that character is. This lets them know what they can expect from him moving forward.

Making your characters distinct and likable from the beginning is important! After all, readers will have to stick with them for dozens, hundreds, or even thousands of pages—so make sure that’s something they can look forward to.

Not only is the first page important, but the very first line of your story is as well. You should be able to accomplish many of the things that makes a first page good in just one sentence. This is especially true if you are submitting your story to a publisher—sometimes, the first line is as far as they get before they make a decision about your story as a whole. A good way to do this is to start with dialogue, usually in the middle of a conversation for which the reader has no context!

Writing the first page of your story is difficult. It is one of the hardest things to write for a story, and most writers quote it as their least favorite part to write. However, you should never settle for mediocrity. Put in the extra effort to make it perfect, and it will be worth it in the end.