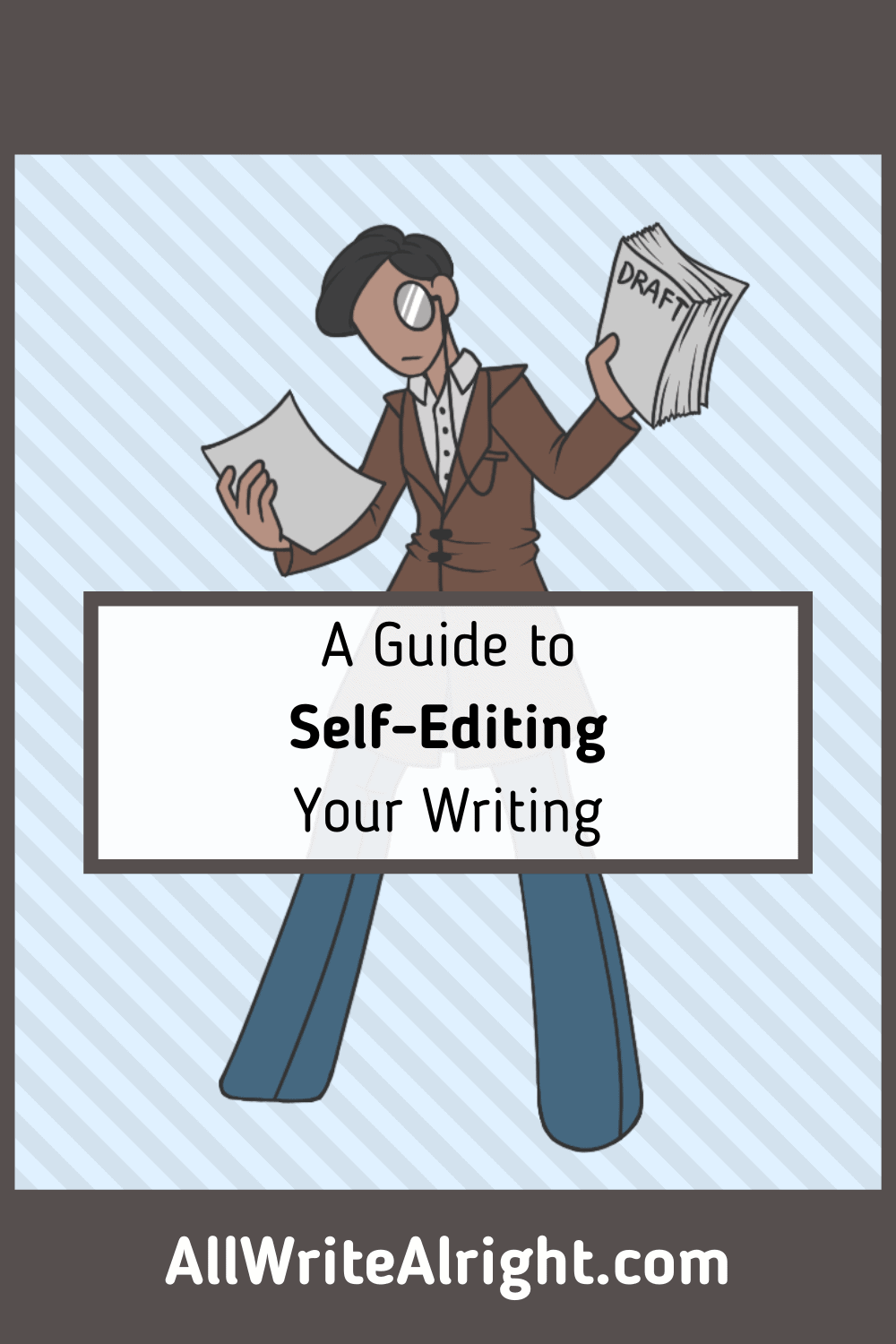 If you’re like most new writers, getting a professional editor to edit your story isn’t going to be feasible. If you write as a hobby, it won’t make sense to spend money getting your work professionally edited, and if you’re short on cash, it might be downright impossible. Editing services are not a luxury that everyone has access to, and even if you do, you should consider self-editing anyway.

Self-editing is an incredibly valuable skill to learn. It’ll make you a better writer over time, and your future first drafts will require less editing as you learn what to look out for. Even if you plan to hire an editor, you should consider editing your work yourself before sending it off to someone else. Self-editing first will help you develop this skill, but also, you’ll save time and money if you can catch mistakes early. Finally, by editing a story to the best of your ability before entrusting someone else with your creation, you will better preserve the authenticity of your unique author’s voice.

You can refer to this table of contents like a checklist as you work through editing your stories.

Set Your Draft Aside

The moment you finish writing your first draft, you need to set it aside. Don’t look at it for several weeks—or longer. Don’t even think about it at all, if you can help it.

A lot of writers will recommend this approach, and with good reason. You need to be able to approach your draft with a refreshed perspective. You need the words to feel new to you again, so you don’t have any expectations when reading over them again. Taking a break will help you spot mistakes that you may have overlooked before.

As both a writer and an artist, I can attest that staring at a piece (of art or writing) for too long can make you blind to the mistakes. Too many times, I’ve forgotten to color in a character’s eyebrow because I was so focused on drawing other details.

Read the first page of your story as if this is the first time you’ve seen it, and you’re trying to decide whether it’s worth it to read the whole story. If the opening scene dramatic? Is it exciting? Does it make you want to turn the page? Or do you only care about the characters because, as the writer, you know what happens later?

Sometimes, writers start their story with something mundane, or with a cascade of backstory readers just won’t care about yet. If you want to start strong, you need to open up with the action. Excite readers, make them curious, and you can make them care about the backstory later.

For a more comprehensive explanation of how to do this well, I have another article on the topic: Writing the First Page of a Story: Tips to Make it Perfect.

Look at the Big Picture

Many writers nitpick about the structure of their sentences or their particular word choice, and although that can be a good strategy, you shouldn’t focus on that when you first start editing. Don’t think about the words in your story right now. Think about the story itself.

Before you move on to the details, you need to make sure that your story makes sense as a whole. Search for plot holes, unanswered questions, and any parts of the narrative that don’t make sense. It takes you a lot longer to write a story than it would take a reader to read it, so you might forget things. Your readers will not.

If you intend for your story to stand alone, then you need to tie up all the loose ends. If, however, you are planning a sequel, it’s better to leave some questions unanswered, to entice readers to read your next story.

The next thing you’ll need to be on the lookout for is errors in consistency. If you change tense, perspective, or tone, that can be a jarring shift that will take readers out of your story. Likewise, if a character behaves inconsistently or goes against their morals, they’ll lose any authenticity they might have had.

Once you establish something in your story, you need to keep it that way. You can change tense to indicate a flashback or dream, but only as long as that change is deliberate and makes sense with the context.

Readers don’t like being told what to think. When you’re describing something, you should use cues to hint at how a character feels, rather than just saying it outright.

For example, instead of saying, “she was angry,” try describing the character’s body language. She could scowl, slam her hands on the table, or steadily raise her voice as she is talking. Readers wouldn’t need to be told how she feels if her body language reflects her emotions.

This applies to more than just characters, of course. If a setting is “creepy,” don’t just say that it “feels creepy.” Describe what aspects of the environment make it unsettling, and subtly hint at that creepiness with the words you choose to describe it.

Compare “the house just felt creepy” with this:

No one had been inside this house for almost a decade, and as we busted open the back door, I could only assume this is what it would feel like to enter an ancient tomb. The air inside was still and silent, and it made our footsteps seem like the loudest sound in the world. As if that wasn’t bad enough, our flashlight did little to chase away the shadows in the corners of the room—shadows that seemed to reach out to us whenever we turned away.

For a more in-depth breakdown of “show, don’t tell,” take a look at Show, Don’t Tell: What it is and How to Write it.

Read Everything Out Loud

Once you have a coherent draft and edited out any inconsistencies in the storyline, it’s time to start fixing the details. This is the beginning of “line editing,” which is the process of editing your entire story line-by-line.

If you’re rolling your eyes at the idea of reading your entire story out loud to yourself, you’re getting ahead of yourself. This is another helpful strategy that will help you catch mistakes. By reading your story aloud, you can analyze each sentence’s flow by how it sounds when you say it.

And mumbling doesn’t count; you need to perform it. Try to find an audience to read to, even if that audience consists of your cat or some houseplants. Reading it out loud like someone is listening will force you to take it more seriously, and the mistakes will become much more evident.

Improving your word choice is more than just using fancy words. You want each line of your story to communicate what is going on in the story clearly, but there are a few ways to do that.

Here are some tips for improving the word choice in your story:

It’s not uncommon for writers (even professionals) to misuse semicolons, dashes, hyphens, and many other types of punctuation. If you’re going to be publishing or posting your stories anywhere, then you should double check to make sure you are using those marks correctly.

The Punctuation Guide is an incredible resource on the different types of punctuation and how to use them appropriately. I highly recommend taking a look at the site! After all, editing might go a bit smoother after a quick refresher on grammar rules.

Dialogue can be tricky for many reasons. For one, it’s difficult to create dialogue that sounds like something real people would say, but also, most new writers use quotation marks incorrectly when writing the dialogue on the page.

I may write an article on this topic in the future, but for now, this PDF from Ursinus College is a useful resource to reference when writing dialogue.

One more thing: when writing dialogue, especially if it is long, you can make it more interesting by interjecting with narration. Compare these two examples:

Notice in the second example that I don’t use the word “said” either. If you establish who is talking by focusing on that character’s actions or behavior, then you won’t need to use “said” or any weird synonyms for it at all. This is called an “action beat.” If you want to learn more about this technique, check out Action Beats: What They are and How to Use Them.

Most basic spellcheckers are pretty good at catching simple mistakes, but don’t put too much faith in your word processor. Most of them won’t catch regional spellings for different words (consider: “Color” in the U.S. but “Colour” in the U.K.), and many won’t catch words that are spelled correctly but used in the wrong context (“I am form New York” for example).

It is up to you to make sure that your spelling is correct, and that you are following all grammatical rules appropriately. If you are planning on submitting your work to a publisher, you should know that spelling and grammar mistakes are often enough to get an editor to reject a draft—even if the story is good!

Use an Editing Program

There are several different types of editing software you can use to make editing easier, but I personally use Grammarly. I use it to edit my stories, my emails, and even the articles I post on this blog. It makes the editing process so much easier because it catches most of the problems outlined above, from correcting spelling and grammar errors to suggesting better word choices. And the best part of all? Most of its functionality is free.

Using an editing program like Grammarly does not mean that you are an amateur or that you aren’t good at writing. Even the best writers make mistakes sometimes, and that’s perfectly natural. I’m personally guilty of accidentally typing the same word twice—and I do it often. Don’t feel bad about making the editing process easier on yourself.

When you’re editing a story, it can be easy to get overwhelmed. There are so many things to look out for, and so many things you need to know. You have to fix everything from story-wide plot holes to missing commas, and it’s difficult! It can feel like you’re never going to be finished.

You need to keep a clear head, and you need to be realistic about what you can change, and what really matters.

So, I’ll leave off with one last piece of advice: don’t go overboard. If you become obsessed with making your story perfect in every way, it will never truly be done. You should go through your story three to five times to edit out mistakes, but after that, you should feel confident that it’s good. You should be able to say that it’s finished.

Good luck! And keep your heads up, writers. I know you can do it.