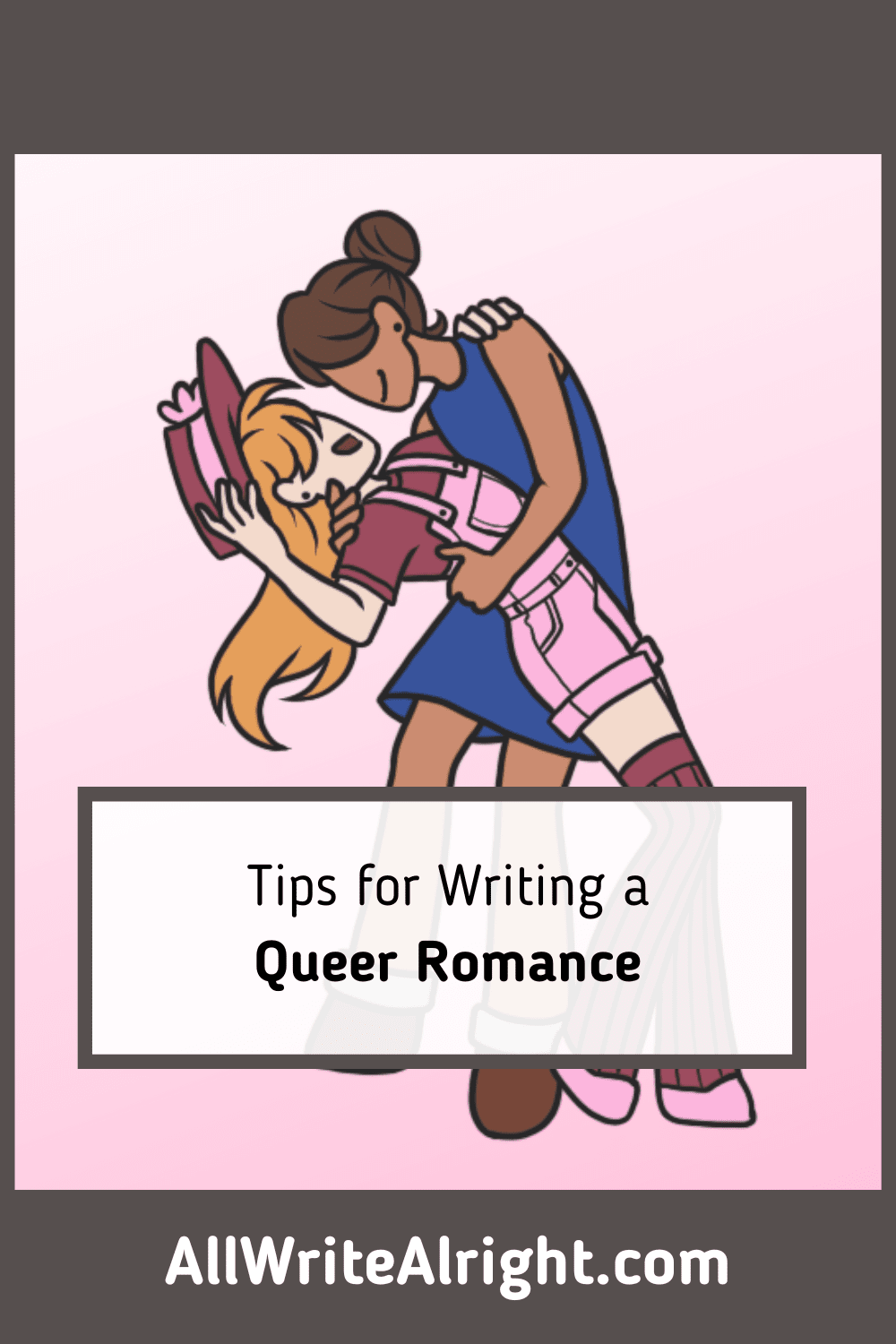 Writing a queer romance story can be a lot of fun, though it can be nerve-wracking to get started—especially if you don’t fall under the LGBT+ umbrella yourself. How can you be sure you’re not stereotyping your characters or inadvertently falling back on stale old tropes? How do you accurately portray romance between characters when the relationship structure differs from what you’re familiar with? How can you avoid offending your readers or creating a story that negatively impacts the perception of the larger LGBT+ community?

Worry not! Writing a queer romance might not be a straightforward process, but once you understand what to do and what to avoid, you’ll be able to create a vibrant love story with exciting, diverse characters—without misrepresenting what it’s like to fall in love as a queer person.

This is told from my perspective as a self-identifying queer nonbinary person. Some individuals may not appreciate you using the word “queer” if you are not part of the community yourself because of its status as a reclaimed slur. Though I embrace the term, this discourse is something you should be aware of.

Contents hide
1 What is a “Queer Romance?”
2 What Makes a Queer Love Story Different?
3 Tips for Creating Queer Characters
4 Writing About Attraction and Relationship Chemistry
5 Unique Challenges for Writing A Queer Love Story

What is a “Queer Romance?”

Additionally, a romance can also be considered “queer” if it breaks the societal conventions of a traditional romance. This includes situations such as polyamory, queerplatonic relationships, open relationships, and more. Given the nature of these relationship structures, however, at least one of the people involved is usually under the LGBT+ umbrella anyway (just not always).

At their core, queer love stories are not fundamentally different from any other kind of love story. Someone who picks up a queer romance story can expect the plot to follow the characters as they discover their love for one another and face any challenges to their relationship along the way.

For some tips on writing romance in general, you can take a look at my other article, Romance 101: How to Write Characters Falling in Love.

Aside from the base premise, however, there are a few things that generally differ about queer romances in particular.

For one thing, characters’ self-discovery often plays a much larger role in queer romances when compared to their heteronormative counterparts. Before the queer romance can begin, the characters have to first understand themselves well enough to know that they are not cishet. (“Cishet” is a compound word combining “cisgender” and “heterosexual.” It simply means a person is not LGBT+.)

Self-discovery can occur at any point in the story, or throughout it. A character can begin to question their sexuality the moment they lay eyes on their potential love interest, or they could have begun their journey of self-discovery long before the start of the story. The situations of the individual characters can differ wildly too. One character may be secure in their sexuality and gender identity, while the other is in the midst of a sexuality or gender identity crisis. A character continuing to question their sexuality after the relationship begins can also be a good source of conflict for the story, both internally for the character experiencing the uncertainty, and for their lover who may feel inadequate as a result.

Speaking of conflict, that’s another thing that tends to differ between traditional romances and queer romances. In a traditional romance, much of the conflict comes from the lovers themselves as they learn how to deal with their differences. They may have different habits, goals, situations, ideals, etc. Alternatively, in a queer romance, conflict in the story often comes from outside the relationship, such as from family members who disagree with the relationship, or politicians who advocate for laws that could jeopardize the lovers’ lifestyle. Of course, neither type of story is limited by what kind of conflict it can include. These are just generalizations.

If you want to generate some ideas for conflict to include in your story, be sure to check out The 4 Main Types of Conflict in Stories (And Variations!)

Characters are the foundation of a good romance. If the characters are not written well as individuals, then readers won’t care about the romance. For the most part, queer characters should be written just like any other character, and that shouldn’t really come as a shock to anyone. (Queer people are just people, after all.)

How to Make Characters Interesting, Complex, and Unique is an article that will walk you through the basic things you need to keep in mind when creating characters for a story.

That aside, here are some tips for writing about LGBT+ characters:

Writing About Attraction and Relationship Chemistry

Once you have your character concepts, you need to start crafting the relationship you want them to have. You need to make sure it’s realistic for the characters to end up together, and if the characters aren’t compatible, you’re going to have a hard time getting readers to connect with them.

Ultimately, relationship compatibility is about convincing readers that the characters are good for each other. It isn’t all about opposites or similarities, but rather, it’s about finding opportunities for them to meet the other’s relationship needs. Consider what each character would find attractive, and what kind of personality would work well with theirs. Some people consider humor to be the most important factor when choosing a partner, whereas other people consider long-term goals or lifestyles first. Others judge potential partners on their ambition, appearance, or interests.

Establish what each character likes or needs before the characters fall in love, so their attraction to each other feels more natural. You don’t have to state this explicitly, however. If you show your character being a disorganized, depressed mess, your readers will automatically assume they would benefit from being with someone who is patient and well-grounded. Then, when you introduce that attractive, organized, and soft-spoken librarian, readers will feel that romantic spark between them right away.

However, it can also be fun if your story starts with the characters disliking each other, and then slowly coming to realize that they just might have feelings for each other. The “enemies to lovers” trope is incredibly popular, and it works really well if the characters’ hatred for one another stems from misunderstanding or bias. A large part of the plot could revolve around the characters’ individual personal growth and development as they let go of their old biases and reevaluate things they have been made to believe. This can be a great parallel to go along with a character’s self-discovery about their own sexuality.

If this is a dynamic you want to explore for your queer love story, you can take a look at my other article: Writing From Enemies to Lovers: Creating Dynamic Relationships.

Keep in mind, however, that the characters still need to be compatible with each other—even if they can’t see it in the beginning.

When you’re writing a queer love story, there are a lot of nuances you need to be aware of.

In most of the world, being a queer person can be a dangerous thing, and if you write realistic fiction, a certain degree of struggle and pain is going to end up in your story. At the same time, however, there are already many, many queer love stories that depict the painful reality that is being queer in a world that refuses to accept that.

It’s okay to write fiction that’s meant to be an escape from reality. It’s okay to write queer romances that aren’t also queer tragedies. There should be love stories featuring LGBT+ characters that aren’t filled with sadness and trauma. Even if it’s unrealistically optimistic, queer people deserve to see themselves represented in happy stories where they can be loved for being themselves. Queer characters deserve happy endings too.

This doesn’t mean you shouldn’t write your dark and gritty story featuring heartbreak, angst, and trauma, but it is something you should think about.