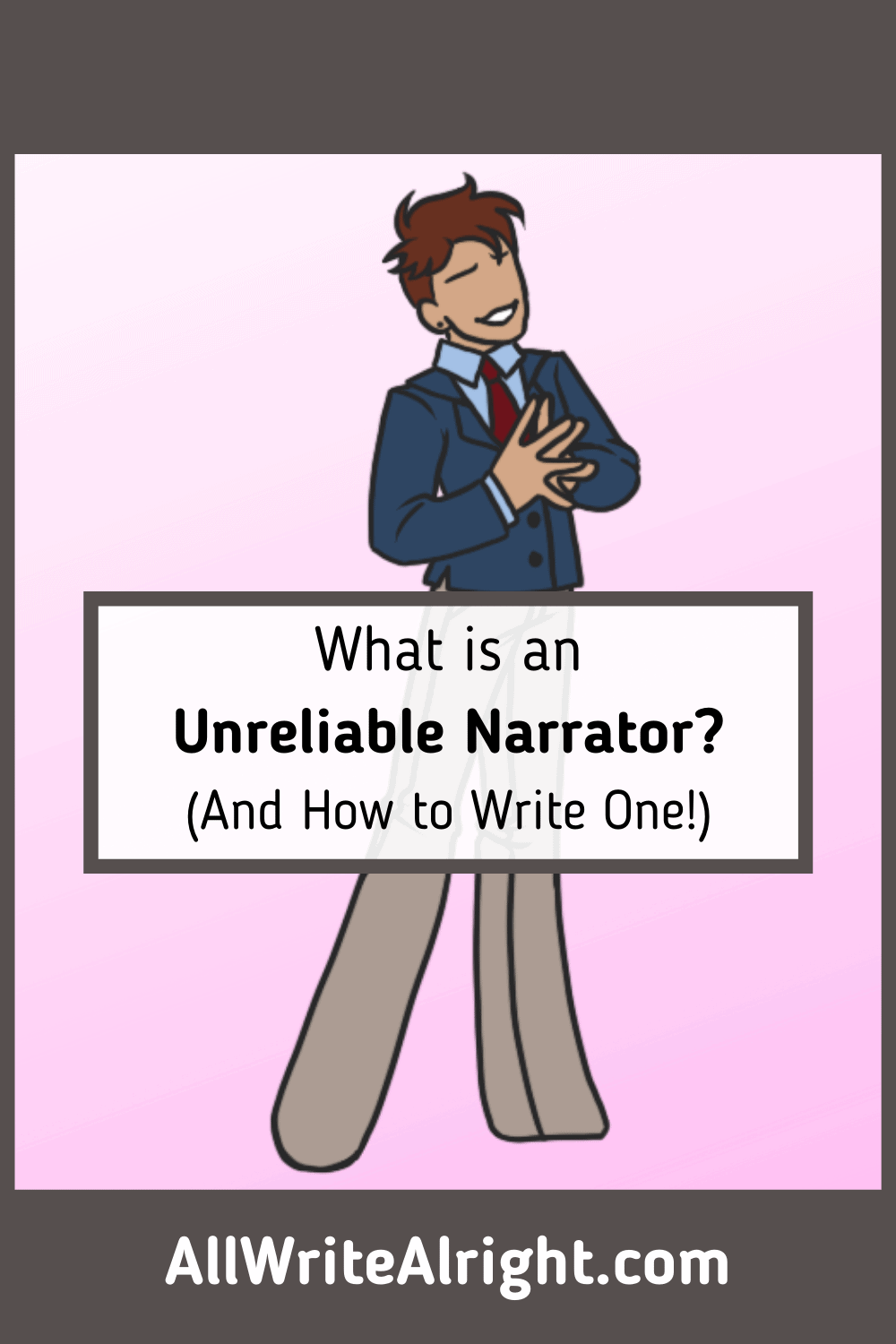 Unreliable narrators allow you to get more creative with how you tell your story, which can make it more complex and interesting to read. However, writing an unreliable narrator is no easy feat, since there are many things you need to do well throughout the entire narrative in order to make the character authentically misleading.

When you reveal the character’s true nature, you don’t want it to come as too much of a shock to readers, but you also don’t want to make it too obvious from the beginning that they’re not to be trusted. In addition to that, you also need to fully flesh out the narrator’s motivations and identity to ensure readers will actually feel connected to them in the first place.

What is an Unreliable Narrator?

An unreliable narrator is a narrator who doesn’t tell their story accurately, whether on purpose or by accident. They lack credibility or integrity, and cannot be trusted to provide an unbiased account of the events that take place.

Unreliable narrators may present false information, omit some information entirely, or inject many of their own biased opinions throughout the telling of the story. In most cases, a narrator is not revealed to be unreliable until the climax or very end of the story, thus providing the story with a convenient plot twist. Other times, readers know that a character is going to be unreliable from the very beginning, such as if the narrator is too young to think critically or if they are known to be a little mentally unhinged.

There are two main types of unreliable narrators: intentional and unintentional.

Unintentionally unreliable narrators are narrators who aren’t necessarily qualified to tell their own stories. This can happen for a number of reasons, so here’s a list of how a narrator can be unintentionally misleading:

An unreliable narrator can technically fit into both categories —intentional and unintentional—at the same time. A character may be both biased against a particular kind of person and delusional. A character may be a child who thinks lying and misleading others is fun. A character could be lying to protect themself and also incredibly stupid. If your narrator fits too neatly into only one of these categories, you maybe need to work on making your character a bit more complex.

How to Make Characters Interesting, Complex, and Unique

As always, be very cautious about how you utilize tropes that rely on mental health, neurological differences, and insanity. Your work shouldn’t misrepresent any condition, nor should you participate in perpetuating harmful stereotypes against any marginalized people.

How to Write an Unreliable Narrator

It’s not easy to write an unreliable narrator.

When you choose to write your story from the perspective of an unreliable narrator, you have to be prepared for that to impact your entire story. An unreliable storyteller is going to alter how you describe the events in the story, interactions between characters, and the descriptions you use for everything—including the narrator themself.

To make matters more complicated, unreliable narrators are vastly diverse, and the context they exist within and the stories they tell can vary so wildly that there is no universally applicable solution. With that said, there are a few pieces of advice you can keep in mind when you’re plotting out how to structure your story.

First things first: keep your narrator consistent. Regardless of how intentional their unreliability is, you should keep them consistently unreliable from the very beginning.

You should be leaving little clues about the character’s true nature throughout the story up to the big reveal—but you need those clues to be subtle enough for most readers to miss entirely. If someone goes back to reread the beginning of the story, however, it should be glaringly obvious that the character has truly been unreliable all along.

If you don’t leave those clues behind, readers may feel as if the plot twist is cheap and too unexpected. They may feel as if the narrator is randomly acting out of character, or their personality and motives have shifted too suddenly.

People don’t like to be lied to, so it’s important that your narrator is a character the readers will be willing to forgive (or at least put up with until the end of the story).

Not only that, but in most cases, you want readers to be able to trust the narrator, so you can break that trust later for dramatic effect. After all, it will be a lot more heartbreaking if the readers feel betrayed by a character they believed in.

“Show, don’t tell” is good advice for any story, but it is especially applicable to stories that utilize an unreliable narrator.

In many situations, you will need to rely on other cues besides what a character says verbally to clue readers in to their true intentions. Readers will begin to question the narrator if their actions and their words are in conflict. For example: if a character claims to be in love with another character, but doesn’t behave as if that’s true, then readers will pick up on that. That can be one way that you indicate the character isn’t 100% trustworthy, or that they may be hiding something.

There’s a lot of misunderstanding behind the concept of “show, don’t tell,” so if you want a refresher on what that is, check out my other article: Show, Don’t Tell: What It Is and How to Use It (With Examples).

Use Other Characters to Your Advantage

Side characters play an instrumental role in stories with unreliable narrators.

Even if you present all the clues from the very beginning, some of your readers are not going to be attentive enough to pick up on them. However, other characters in the story can pick up on the things you want readers to notice too, and draw attention to them. Side characters can question information provided by the narrator, gossip amongst themselves, and tell a different version of the same events the narrator describes.

It’s also important to keep in mind, however, that the narrator is in control of your story, so side characters would get glossed over if they say anything too explicit that your narrator wouldn’t want readers to know. This is only a concern for unreliable narrators who know that they are lying about the events of the story they’re relaying. Unintentionally unreliable narrators don’t (think they) have anything to hide.

This tactic is great for making your narrator seem unreliable, but it can come across as a bit obvious; therefore, it is best utilized near the end of the story.

For tips on including interesting side characters in your story, take a look at How to Write Minor Characters.

Even with all the clues you leave throughout the narrative to hint at the narrator’s unreliability, you want to make sure you aren’t telling readers everything. A certain amount of secrecy is required to properly write an unreliable narrator.

You don’t have to give readers the answers to all these secrets by the end of the story, either. Sometimes, leaving your ending a bit ambiguous and open for interpretation can leave people thinking about your story long after they finish reading it.

Like keeping secrets, sometimes it’s a good idea to deliberately provide readers with the wrong information.

The easiest way to mislead your readers is through other characters. The things that the characters believe in are going to be the basis of your readers’ opinions, even if they end up questioning things later on. For example, if you’re writing a crime mystery story, and all the characters believe that one of their suspects is the guilty one, your readers might not have any reason to doubt them until new evidence comes up in the plot. You’re deliberately trying to control what the readers believe, so a future plot twist will come as a bigger surprise.

Different kinds of unreliable narrators are going to lie about different things for different reasons. A narrator afraid of rejection may hide their flaws and lie about their past, but a compulsive liar might lie about anything for little to no reason. Either way, little lies here and there can help to establish doubt about what the character says regarding larger plot points.

Of course, don’t just write nonsense and expect your readers to be able to put everything together. Feed them clues that the plot may not be as predictable as they’re expecting, such as contradictions in the narrative or in the things characters say to each other.

What’s the Point of an Unreliable Narrator?

An unreliable narrator can make a story less straightforward, and therefore more interesting. It gives the narrative an unpredictable element, which gives you a lot of freedom to craft a dynamic and complex storyline. A linear storyline is a lot less compelling than one with many twists and turns—after all, if a reader can predict what will happen, they might just lose interest in the story as a whole.

Realistically, every single narrator that isn’t an objective, omniscient entity should have some level of unreliability. Every person with a conscience is slightly unreliable at all times. You probably don’t tell the truth about everything all the time, and you don’t know everything there is to know about every single subject. You have secrets, biases, and things you don’t understand—everyone does. Your characters should be the same way.

Taking this approach to understanding unreliable narrators as a whole can help you get comfortable with writing about them.